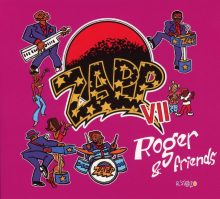 Zapp & Roger, an important funk band that emerged from Dayton, Ohio in 1977, brought the world hits like “More Bounce to the Ounce,” “Computer Love,” “Do Wa Ditty,” “So Ruff So Tuff” and a couple decades more of electrifying funk. The Zapp sound was iconic for the use of moog bass and synthesizers that provided multiple timbres, textures, patterns and hits; deep bass drum and hard hitting claps with just enough reverb to shake a stadium and keep the party going; and the unforgettable and legendary use of the talk box. The late funkateer Roger Troutmen, lead vocalist of Zapp & Roger, used a custom-made talk box—the Electro Harmonix “Golden Throat,” as well as a Moog “Minimoog” and, later in his career, a Yamaha DX100 FM synthesizer. Roger said, “Every time I would use the voice box, people would be dancing, until I use it and people would look up, and it seemed to [be] hypnotizing them in a way.” This funk all-star group consisted of Lester Troutman, Sr. (drums), Terry “Zapp” Troutman (talkbox, keyboards, bass), Bart Thomas (talkbox, vocals, keyboards, bass), Dale DeGroat (musical direction, keyboards, vocals), Thomas Troutman (keyboards, vocals), Riccardo Bray (guitar) and Anthony Arrington (sax).

Today, over four decades later, we are still being hypnotized by the Zapp band sound on their newest album, Zapp VII Roger and Friends. Though Roger died in 1999, he is still a part of this project. Three of the tracks draw from unpublished guitar and vocal tracks recorded by Roger and culled from the Troutman family archives. The band is joined by artists such as fellow Ohio funkateer Bootsy Collins, Snoop Dogg, Kevin Gilliam (BattleCat), Tuxedo, Kurupt and Mr. Talk Box (aka Byron Chambers).

The album begins like most great funk projects and shows, with a party! Zapp will “make you dance” in songs such as “After Party,” “Parking Lot” and “Shy” featuring Tuxedo. If those are not enough “bounce for your ounce,” you’ll certainly be funked up by Funkologist Bootsy Collins, who joins the band on the jam “Make It Funky.” This guest spot is a nice tribute to Bootsy, who helped discover the band and produced their debut album, Zapp, in 1980 on Warner Bros. Records.

It wouldn’t be a Zapp album if we didn’t fall in love at some point. “Angel” is a Roger Troutman song that follows in the footsteps of Zapp’s classic 1987 hit, “I Want To Be Your Man,” with the use of melodic bells, soaring keyboard-generated strings, and a synth lead solo that makes you feel like holding your partner tight and never letting go.

Zapp & Roger has produced decades of amazing music that has brought people together around the world. Currently on a world-wide tour across North America, Japan and Europe, the band proclaims: “The Zapp Band will have you on your feet and dancing like you are back in 1980 again! It is a family affair for all who remember the musical genius, Roger Troutman, may he Rest In Love…”. Get ready to be funktified by this amazing new album and may this legacy of the funk continue to thrive!