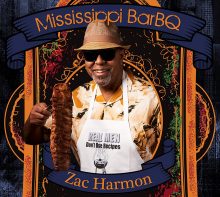 A native of Jackson, Mississippi, Zac Harmon knows barbecue like he knows the blues: intimately! No wonder the award-winning blues singer and guitarist has chosen to celebrate grill season in the South on his latest album, Mississippi BarBQ. Like many young folk, Harmon was beckoned by the bright lights of Tinseltown and spent many years in L.A. as a studio musician, songwriter and producer—including a stint at Michael Jackson’s publishing company, ATV Music. After writing songs for R&B artists such as The Whispers, The O’Jays, and Karyn White, Harmon decided to return to his roots and released his first blues album in 2003. What is immediately apparent on his latest effort are the dual strands of his musical influences, or in more colloquial terms, the soul seeps into his blues like barbecue sauce into pork.

The title track brings local culture to life as everyone from the “cousins to the Johnson twins” are invited to come on over for “chicken and ribs on the grill, two kinds of pie on the windowsill, pickles and onions and collard greens, corn bread and a big pot of beans.” There are two additional tracks that seem to speak to Harmon’s lived experience: the funky “Make a Dollar Out of Fifteen Cents” and the pleading strains of “Lord Save Me From L.A.” to which Harmon promises, “I’ll never go astray.” Other songs hew more closely to blues rock such as the opener “Gypsy Road” and “Smoke and Mirrors,” both highlighting Harmon’s prowess on vocals and lead guitar. On the track “Desperate Love” the horns come out to play, while on “Sunday Morning After Saturday Night” organ riffs remind sinners they are in the house of the Lord, which all goes up in flames as special guest Texas Slim leaps in with a blazing guitar solo. The album closes with a heartfelt rendition of the Bob Dylan classic, “Knocking on Heaven’s Door,” and a spoken dedication to “all of our country’s service people.”

Mississippi BarBQ offers a variety of musical styles and messages, ranging from lighthearted celebratory songs to the blues of love gone cold, with a few life lessons for good measure. Top that off with an excellent crew of musicians, including The Rays and the Zac Harmon Band, and you have a recipe that brings the heat to a whole new level.