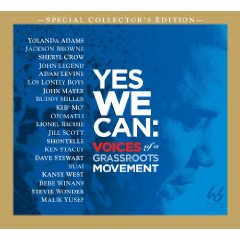 Released just in time for the 2009 Presidential Inauguration, you can now purchase the official Obama campaign CD, which was previously available only as a bonus to donors. The compilation includes music representing “the essence of the messages espoused” by Obama. As producer Steve McKeever explains in the liner notes, a huge number of artists and industry folks were pitching songs, and many  compilations were privately compiled and circulated. However, complex campaign finance rules inhibited efforts to use any of the material for fundraising purposes.  McKeever perservered, eventually finding a way around these obstacles, but then finding himself with an impossibly short (48 hr.) deadline. Regardless, 150 songs were put forth for consideration, resulting in a playlist that was originally 10 hours long.

Finally winnowed down to 18 tracks, the performances chosen for Yes We Can represent multiple genres from rock, pop, and country to gospel, R&B, hip hop, and the blues. Featured performers include Lionel Richie (“Eternity”), Stevie Wonder (“Signed, Sealed, Delivered I’m Yours”), Shontelle (“Battle Cry”), John Legend (“Pride, in the Name of Love”), Bebe Winans (“I Have a Dream”), Jill Scott (“One is the Magic #”), Yolanda Adams (“Hold On”), Keb’ Mo (“America the Beautiful”), Suai (“Am I All Alone?”), and Malik Yusef with Kanye West and Adam Levine (“Promised Land”).  Many of the songs are introduced through snippets of speeches by Obama and Rev. Martin Luther King, Jr., while others actually interwine song lyrics with speeches or crowd chants.

The 51 p. booklet that accompanies the CD is a wonderful campaign memento, including photographs, texts of speeches, and the lyrics for each song. Of course, many other artists wrote music that was inspired by the campaign, and not all could be included here. McKeever hints that other compilations might be considered in the future. Meanwhile, now that the election is over, Hidden Beach will be donating a portion of the profits on all future sales of Yes We Can: Voices of a Grassroots Movement to charity.