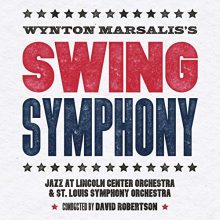 Trumpeter, bandleader, educator, Pulitzer Prize winner, symphonist—Wynton Marsalis has run the gamut of musical accomplishments, both as a musician and as a composer. This release, one of four albums appearing this year, is the premiere recording of Marsalis’s Swing Symphony (Symphony No. 3), first written in 2010. The work “traces the evolution of the swing rhythm from ragtime to this very moment in order to unite diverse instrumental techniques, musical personalities, song forms, dance grooves, and historic eras.” Drawing inspiration and musical material from the past, Marsalis has telescoped over a century of jazz into an hour, deftly performed here by the Jazz at Lincoln Center Orchestra and the St. Louis Symphony Orchestra under the baton of David Robertson.

Since his youth, Wynton Marsalis has had a foot in both the worlds of jazz and classical music, and that duality has lent a particularly historicist tinge to his artistic creations. The son of pianist Ellis Marsalis and brother to three other professional musicians, Wynton was immersed in the music of New Orleans from childhood. He attended the Tanglewood Music Center at 17, began studies at Juilliard at 18, and signed a contract with Columbia Records at 19. He performed with giants like Art Blakey, Dizzy Gillespie, and John Lewis around New York, formed his own band and began touring. While he was building a reputation in the jazz world, he maintained his classical chops, earning Grammy awards in 1983 for both the jazz album Think of One and a recording of the Haydn, Hummel, and Mozart trumpet concertos. In 1987 Marsalis co-founded Jazz at Lincoln Center, which became an official branch of Lincoln Center in 1996, not only serving as a home for performances but for education and outreach. Marsalis’s genre-defying compositions began appearing around the same time, with the 1994 oratorio Blood on the Fields and the 1995 string quartet At the Octoroon Balls. Blood on the Fields became the first jazz work to win a Pulitzer Prize for music, and only the second winning piece by an African American. Both of these early works as well as many of Marsalis’s subsequent compositions are windows on the past: on America’s history of slavery and discrimination, or on the music African Americans have created despite that history.

Marsalis’s first symphony, All Rise, is a monumental work for jazz band, symphony orchestra, chorus, and vocal soloists. Swing Symphony is smaller but still expansive in scope. Its seven movements trace swing’s history from ragged piano marches and hot jazz through dance music, big bands, bebop, cool jazz, the third stream, and other introspective styles, to the eclectic possibilities of the present. Composing on commission from the Berlin Philharmonic, London Symphony Orchestra, New York Philharmonic, and Los Angeles Philharmonic in 2010, Marsalis edited and expanded the piece over its early performances, making improvements and filling in missing movements. He drew inspiration from Paul Whiteman and Benny Goodman’s historicist jazz concerts, Duke Ellington’s Black, Brown and Beige, and other synthesizing American composers like George Gershwin, Florence Price, and William Grant Still. While composing, Marsalis often used the “contrafact” technique, popularized by jazz musicians in the 1940s, where a new song would be written over the harmonies of an old one, facilitating improvisation and skirting copyright—Charlie Parker and Dizzy Gillespie’s “Anthropology,” over the harmonies of Gershwin’s “I Got Rhythm” is one example. Most of the movements of Swing Symphony draw harmonies from iconic standards of their respective eras, such as “Maple Leaf Rag,” “Topsy,” or “Pork Pie Hat,” although untrained audience members might not recognize the musical borrowings without the help of Marsalis’s detailed program notes. Stylistic borrowings are more readily apparent. The slow drag and boisterous march in the first movement, “St. Louis to New Orleans,” are easily identifiable as a traditional New Orleans funeral procession. The blisteringly fast bebop trumpets that open the fourth movement, “Manhattan to LA,” immediately recall Dizzy Gillespie. In a video on his website, Marsalis refers to the latter moment by saying he “tried to write something that was so hard, [the trumpets] didn’t want to play it.”

Despite that comment, Swing Symphony feels like a piece that the performers are having fun playing, and members of both ensembles are featured. Members of the JLCO play some great solos, occasionally making musical references of their own. In a section of the fourth movement inspired by Afro-Cuban jazz pioneer Machito, bassist Carlos Henriquez and trumpeter Kenny Rampton both playfully quote The Champs’ 1958 hit, “Tequila.” Marsalis experiments with the colors of the symphony orchestra, counterpointing cellos with saxophones in honor of Coleman Hawkins (who played both instruments) and using symphonic percussion to mimic the thunderous big band drummer Gene Krupa. Throughout the entire album, both the JLCO and the SLSO play with precision, even in passages of fiendish difficulty. Maestro Robertson is known for championing modern American composers, and he deftly interprets Marsalis’s music.

As might be expected from its premise, Swing Symphony offers a huge diversity of styles. Marsalis once mentioned that he tried to include as little musical repetition as possible to counteract the repetition inherent to jazz forms, and Swing Symphony certainly delivers a kaleidoscopic variety, even within the individual movements. This variety comes to the fore at the end of the sixth movement (which was the last written), where quotations from the previous movements form a cacophonous collage inspired by the 1960s but also reminiscent of Charles Ives. The variety of musical styles is a strength, making the work easy to listen to and constantly engaging, although several transitions from one section to another feel abrupt. Marsalis does tie the overall piece together with some recurring motives, which, like the layers of musical borrowing and references, reward multiple attentive listenings. Overall, the symphony is enjoyable and encourages thoughtful attention, making the appearance of this recording a boon both to those who have enjoyed Marsalis’s previous symphonic works and to new listeners, who might be inspired to explore some of the music that it honors.