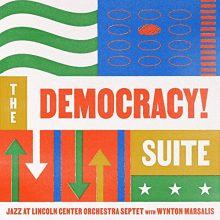 After the ambitious critique of social and political divisiveness in last year’s The Ever Fonky Lowdown, Wynton Marsalis returns to his affable, tuneful self with The Democracy! Suite, an album with a message that promotes optimism in the future of democracy while acknowledging the struggles of recent history. With a few exceptions in his career, Marsalis is a conservative in jazz, though that doesn’t make his music any less enjoyable to listen to, and The Democracy! Suite is a solid collection of perfectly swung tunes given life by players at the top of their game. Using a common argument from Marsalis, jazz itself is taken as a metaphor for democracy, a way of keeping us all together, working for unity while recognizing our individuality.

Composed in the first several months of the Covid-19 lockdown and in anticipation of the 2020 election, The Democracy! Suite is a hope for the return to democratic normalcy and a recognition of the dignity of those who are also challenging the system to create a more equitable future. The music is a mixture of these sentiments, with a refreshing return to a swinging big band style (masterfully recreated in the playing of a septet), though Marsalis is not afraid to include carefully controlled dissonance and some fun countermelodies. The styles vary between tunes, with added flavors of West Coast jazz, light swing, and slow blues.

Perhaps the best illustration of Marsalis’s jazz as democracy metaphor is “That Dance We Do (That You Love Too),” a piece dedicated to the music of protests heard around the world. Overlapping and competing grooves in the trumpet and baritone, soprano and alto sax, and the rhythm section create a washing machine of sound that melds together despite its difference. The soloists, too, each create a totally different world in their approaches to the tune, and yet it all still works. Marsalis is a bandleader that recognizes his players’ talents and can also vary his arrangements to create constant interest, even within his limited palette of mid-century styles.

The group is evenly matched in talent and cohesion, though I was particularly impressed by the cohesiveness of the rhythm section, with the bass and keys playing superbly in unison over some very difficult runs in “Ballot Box Bounce.” Ted Nash also stands out on flute with virtuosic runs in the “Ballot Box Bounce” and an otherworldly departure on soprano sax in “That Dance We Do (That You Love Too).” The album ends with the joyful benediction of “That’s When All Will See,” a revival-inspired celebration of the mutual work that we all can do once the truth is laid bare, what Marsalis describes as “a parade for some future time when we won’t need tragedy to make us see how interconnected we all are; we won’t need death and destruction to force meaningful, intelligent, and humanistic change. Let’s see.”