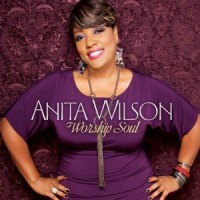 Anita Wilson has performed as a backing singer behind many notable gospel musicians including Marvin Sapp, Hezekiah Walker, and Vanessa Bell Armstrong.  But perhaps her most well-known effort was “Happy Being Me,” a track on Donald Lawrence’s hit album The Law of Confession Part 1 (2009) that really showcased her voice.  Lawrence claims that it’s the tone of Wilson’s voice that attracts people and is perfect for musical worship.

Growing up in East St. Louis, Illinois, as the daughter of a pastor, Wilson was influenced by great gospel musicians such as Vanessa Bell Armstrong, the Winans family, and the Clark Sisters in addition to secular artists such as Brandy, Aretha Franklin, and Lalah Hathaway.  It should come as no surprise, then, that both Wilson and her producer for this album, Rick Robinson, agreed to attempt to break the mold of what constitutes “normal” worship songs in the church setting and make this an album filled with songs with the flavor of soul music. By doing so, Wilson seeks a “new normal” where her music becomes “creative enough and unique enough to be able to go into different settings.”  “It may not be in church settings, but it carries the message of Christ and the message of God and it carries His love,” Wilson says in an interview.  Therefore, as she explains, the title for her first solo project, Worship Soul, is “a marriage of the two sides” of Anita Wilson—worshiper and soul singer—reflecting her desire to create worship through soul music.

Wilson sings, “I can’t find the words to describe you/ It will take a million years to explain the way I feel,” in the first single from this album, “Speechless,” which is a perfect description of  her honest appreciation towards the Lord. Following is the official music video:

Accompanied by an acoustic guitar, “Shower the People” is a spiritual cover of the James Taylor song, and Wilson treats listeners to a similar vibe with her performance of “Happy Being Me.”  She brings James Cleveland’s “Jesus Will” to life with more beats and involves the congregation as they praise the Lord together.  “It’s Done” and “All About You” are songs which the congregation surely can’t resist clapping hands and dancing along with the praising. Ballads such as “Perfect Love Song” and “More of You” showcase Wilson’s warm and deep tone well, while songs like “He Shows Out” and “Keep On Praising,” backed by a powerful horn section, teach us to believe that the Lord takes care of us.

Worship Soul is indeed a good song collection for souls which desire perfect music for worship.