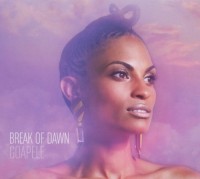 Bay-area neo-soul artist and activist Goapele Mohlabane grew up listening to classic soul as well as the Miriam Makeba records owned by her father, a South African political exile. Her Oakland upbringing also immersed her in the cutting edge urban hip hop scene, leading to collaborations with Aceyalone, E-40, Hieroglyphics (on “Soweto”) and other West Coast MCs.  Break of Dawn is her third studio album, released on Skyblaze Recordings, a label she owns with her DJ brother, Namane Mohlabane.

Goapele describes her new effort as “a little more aggressive,” evidenced by an increasing reliance upon drum sequencing, the occasional use of Autotune, and beats supplied by local producer Bedrock, among others.  While this may increase her appeal to a younger generation of fans, neo-soul purists may well find the electronic elements a bit jarring. The more successful of these tracks is the sensual “Play,” while “Milk and Honey” is overpowered by rather annoying synths. Still, there are many soulful tracks that stand out, especially the more retro “Tears on My Pillow”:

Overall, the vocally gifted, mesmerizing songstress holds great promise. Though the new direction explored on Break of Dawn does not always succeed, her neo-soul songs are right on target.