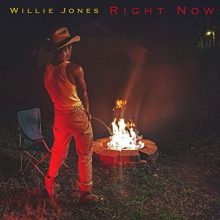 A native of Shreveport, Louisiana, a 26-year-old Willie Jones has crafted a genre-bending sound that captures his Southern roots and incorporates the other diverse musical influences that he loves. On his debut album, Right Now, he secures his place as a next generation country artist, joining the small but growing roster of Black artists who are revolutionizing the genre by deftly adding contemporary elements of hip hop and R&B.

Produced by individuals who work in a number of genres – MyGuyMars (Snoop Dogg, Jay Z, Drake), Mark Batson (Eminem, Dr. Dre), and Justin Ebach (Dustin Lynch, Brett Young, Jordan Davis) among others – Right Now opens with “Country Soul,” as Jones’ sings about his Louisiana background and his penchant for genre-defying music. The popular party anthem “Bachelorettes on Broadway” paints a picture of the pre-pandemic Nashville nightlife and has received over 11 million streams on Spotify. The album’s 11 tracks also include the banjo-driven “Trainwreck,” the country-pop song “Drank Too Much,” and three versions of the soft-hearted track “Down For It,” two of which feature rapper T.I.

In honor of Martin Luther King Jr. Day, Jones premiered the album track “American Dream,” his patriotic protest anthem about the ongoing fight for civil rights as summed up in the chorus: “We’ve come a long way, still got a long way to go / When you’re livin’ as a Black man, it’s a different kind of American Dream.” Jones performed the song at the ribbon cutting ceremony of the newly opened National Museum of African American Music (NMAAM), simultaneously launching his #IHaveAnAmericanDream social initiative with the museum. As part of the initiative, Jones is encouraging fans to use the hashtag throughout Black History Month to discuss their dreams for change in America, as well as texting ‘AMERICANDREAM’ to 707070 to donate to NMAAM.