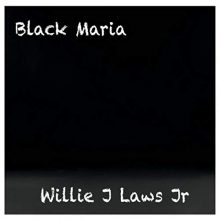 Self-described as “The Prophet of Funky Texas Blues,” guitarist Willie J. Laws offers an eclectic fusion of the blues with sounds native to the Gulf Coast region, including Zydeco, R&B, a twang of country, a little Tex-Mex Tejano/Conjunto, and a dollop of funk. Honed over 25 years of performing with his own band, as well as the Tejano band Los Texmaniacs, Laws’ playing style is American roots music at its best. On his latest album, Black Maria, Laws (on rhythm/lead guitar and vocals) is joined by his longtime band members—Bruce Mattson (keyboards/organ), Osi Brathwaite (drums), and Malcolm Stuckey (bass)—who helped pen the ten original tracks on this recording.

Opening in a funk groove with “Standing in the Rain,” Laws is joined by guest Roberto Morbioli (aka Rob Mo) on rhythm and lead guitar.  Rob Mo also makes an appearance on “Devil in My Baby’s Eyes,” a more classic take on the blues with plenty of tasty guitar solos. The title track, “Black Maria,” is a haunting tale of an arrest for murder, with Laws singing, “In the Black Maria, blood is running down my face/Tears of fear are stinging my eyes/ need to get the hell out of this place.” But all is not lost. Laws is given an opportunity to play his guitar for a chance at freedom, and he lets loose with a solo that’s surely worthy of a “get out of jail free” pass.

Opening with the sounds of a Tex-Mex radio station, “The Smuggler” recounts the exploits of smuggling contraband across the border. The song is a perfect fusion of the blues and conjunto, with Josh Baca (Los Texmaniacs) adding riffs on the accordion. Another standout track is the ballad “Love Like Rain,” sweetened by strings and Law’s crooning vocals.

Laws dedicated this album to another Texas blues musician, his mentor Phillip Walker. Early in his career, Laws toured throughout the U.S. with Walker, where he no doubt had many opportunities to perform Walker’s 1959 hit single, “Hello My Darling,” which is included on the album. The boogie woogie piano, together with the West Side Horns, take listeners back a few generations, while Laws’ guitar keeps us grounded in the present.

The album closes with the autobiographical song, “Last Prophet of the Funky Texas Blues,” full of the words of wisdom Laws received from various mentors, followed by “Snooky Jump,” a real tour de force for pianist Bruce Mattson who pounds out the boogie woogie rhythms in a dual with Law’s guitar.

This is my first introduction to Willie J. Laws, and I’m more than impressed. If you’re looking for an eclectic blues-based album with funk and rock influences, than Black Maria is definitely worth a listen.