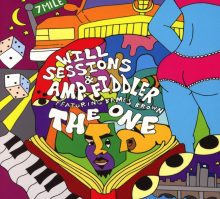 Detroit-based group Will Sessions has made a name for themselves in the motor city. From their early beginnings, the octet released several albums influenced by R&B, hip-hop, funk, and jazz. In 2017, the group began collaborating with legendary funk singer and keyboardist Amp Fiddler, first on their Deluxe album track “In The Ride,” and later that year on their live recording Kindred. Like their previous releases The One includes Fiddler on lead vocals, along with the soulful and dynamic voices of vocal trio Dames Brown.

The One is about “a man’s search for the love of his life, and the trials and tribulations that surround their budding romance with the city of Detroit.” Songs like “Lost Without You,” “Reminiscin’,” “Reconcile,” and others express these sentiments of love and romance. Of course, listeners are also treated to sounds associated with 1970s-80s funk bands such as the talkbox, the heavy synthesizer, slap bass, and the funky chicken scratch percussive guitar parts. The One proves that the funk tradition is alive and well in Detroit. This collaborative project not only pays tribute to the legacy of funk pioneers, but also serves as a fine example of funk’s longevity in today’s society.

The One is a must buy for all you funk lovers out there!