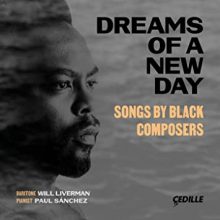 From the 2020 recipient of the Marian Anderson Vocal Award comes the album Dreams of a New Day: Songs by Black Composers. Baritone Will Liverman and pianist Paul Sánchez perform art songs by Black composers, including the world-premier recording of Two Black Churches by Shawn E. Okpebholo.

Will Liverman’s lyric voice is well suited to many pieces selected for this album and shows off his proclivities to power, attention to poetry, and fine-tuned vocalism. In Robert Owens’ Mortal Storm, his voice soars, weaving intricate melodies with some of Langston Hughes’ most haunting texts about the difficulties of African American life. Fans of his rumbling baritone voice will be equally pleased with the great deal of sensitivity displayed throughout this album. Of note is in Damien Sneed’s “I Dream a World.” Here, Liverman employs a beautiful spectrum of vocal colors that is certain to leave any listener hopeful about the future.

Not to be overlooked is the very fine playing of Paul Sánchez. The collaboration of these artists has mutual benefit, but particularly in H.T. Burleigh’s Five Songs of Laurence Hope, Sánchez shines. In an increasingly popular cycle, the Liverman-Sánchez collaboration offers a fresh perspective. Sánchez’s intuitive accompanying accents Liverman’s beautiful voice.  He amplifies the lush harmonies and swiftly guides the listener through a rapturous love story that extends beyond death.

Some songs on this album feel almost religious in their sentiment and delivery. The set of songs Two Black Churches by Shawn E, Okpebholo was commissioned by Will Liverman for this project. These stories recount two fatal events of white supremacy: the 1963 16th Street Baptist Church bombing in Birmingham, AL, which took the lives of four girls; and the 2015 Mother Emanuel AME Church shooting in Charleston, SC, resulting in the deaths of nine parishioners. These pieces require a great deal of virtuosity from both the vocalist and accompanist, and neither disappoint. The movement “Ballad of Birmingham” on text by Dudley Randall includes clever elements of gospel throughout the flourishes of post-romanticism in the piano. Liverman’s robust sound adds gravitas to a story between the mother of one victim and her child. The second movement, “The Rain,” features text by the poet laureate of Charleston, SC, Marcus Amaker. Here, both Liverman and Sánchez employ a masterful level of restraint. The song begins a capella and evolves into a contemplative whirl of text and harmony. Hidden in plain sight is the hymn “Tis so Sweet to Trust in Jesus,” a song used in worship during the first service in the Mother Emanuel AME Church after the deadly attack.

Rounding off the album is “Birmingham Sunday,” an arrangement by Liverman that features him singing and at the piano. In what could easily be considered a devotional, this song recounts the horror of the 16th Street Baptist Church bombing, but most strikingly, finds ample time to pay tribute to its victims. Liverman delivers a visceral performance of homage to Addie Mae Collins, Denise McNair, Cynthia Wesley, and Carol Robertson that cannot be understated. The musical treatment of the refrain “And the choir kept singing of Freedom” is reminiscent of the spiritual “He Never Said a Mumblin’ Word.” The song is reverent and chilling but meant to remind listeners of the power of divine resolve.

Dreams of a New Day is a timely piece of art that elevates Will Liverman’s voice to the growing chorus of activists calling for equity and peace to heal humanity.