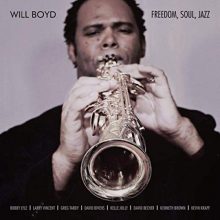 Saxophonist, composer and band leader Will Boyd pays tribute to spirituals, hymns, and freedom songs on his album, Freedom, Soul, Jazz. The project was released to coincide with Juneteenth celebrations, which are holidays observed among Black communities as a de facto independence day commemorating the abolition of slavery and a first step toward inclusion in the greater American dream. Regarding his motivation for the project, Boyd explained, “I wanted to do my part to move the movement forward,” referring to the advancement of Black people in a post slavery society.

Accompanying Boyd, who contributed the majority of the woodwinds, is his wife Kelle Jolly on vocals along with an all-star group of musicians including Gregory Tardy on tenor sax, Bobby Lyle on organ and piano, Larry Vincent and David Bivens on guitar, David Becher on bass, and Kenneth Brown and Kevin Krapf on drums and percussion. The ensemble delivers incredible jazz and blues interpretations of songs affiliated with the Civil Rights Movement including “Keep Your Hand on the Plow,” “We Shall Overcome” and “Every Time I Feel the Spirit.” Two of Boyd’s originals include “August Eighth,” which is emancipation day for East Tennessee (Boyd’s current home), and “June Teenth.” Both works provide beautiful jazz illustrations of these days of observance.

One can hope that Boyd’s originals become standards due to their role in recognizing these important days in history where Black people began to gain their freedom and humanity in the United States of America. As Boyd states, “Sadly there isn’t much (enough) music written to commemorate these important times in American history, and I wanted to do my part in keeping the stories alive.” Freedom, Soul, Jazz does just that, providing a new soundtrack for these African American celebrations while also re-energizing spirituals and freedom songs.