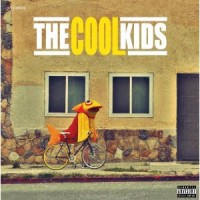 When The Cool Kids released The Bake Sale in 2008, the buzz couldn’t have been higher around the internet, but record label disputes and increasing demand for Evan “Chuck Inglish” Ingersoll to produce other artists’ tracks delayed the release.  During this time, the “hipster rap” duo from Chicago released two mixtapes and a five song EP to keep fans in their seats, and advanced their sound in doing so. The result is When Fish Ride Bicycles, 40 minutes of The Cool Kids doing what they do best—smooth storytelling, fly clothes, and a whole lot of basketball references.

The less-is-more structure on Bake Sale remains, although the sound has diversified from the simple heavy bass of songs such as “Gold and a Pager” and “What Up Man,” and now incorporates elements from the mixtapes Gone Fishing and Tacklebox (2010).  This is clear on the single “Bundle Up”—although using unique drop sound and electric piano to compose the beat, the song is often stripped during the verses by Inglish and Antoine “Mikey Rocks” Reed.  The message of this song is clear; these guys are much cooler than you, rapping about “designs on the back of your jeans” and being “the only third grader in school with a beeper.”  Throughout the album the group spends a significant amount of time talking about their outfits and hanging out, which is the entire song “Penny Hardaway.”

This is the beauty of Bicycles, no real message being delivered but the feeling of a summer day spent outside with homies from your neighborhood.  The duo’s connections to producer Pharrell Williams attributes to the laid back, groovy beats on “Summer Jam” and “Get Right,” which Williams produced.  In a time when hip-hop is as boastful as ever, The Cool Kids are taking it to a different place, simply saying who they are and letting their attitude tell you how cool they are.