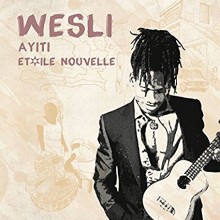 When he was eight years old, Wesli created his first guitar out a used oil can and a nylon shoelace in his hometown of Port-au-Prince, Haiti. Ever since then, innovation and creativity have guided his music-making. Drawing from the many cultures present in Haiti, as well as those in his current city of residence, Montreal, Wesli unites Haitian traditions like vodou and rara with a multitude of genres from reggae to Acadian hip hop. On his fourth album, Ayiti Étoile Nouvelle, Wesli uses these various cultural influences to focus on what it means to be Haitian and a member of the African diaspora in the current political and social climate.

Aside from the lyrics themselves, Wesli pays homage to Haiti through his use of instruments such as the tata and boula, as well as the blending of Afro-Caribbean and creole musical traditions. The opening track, “Rara,” celebrates the style of music used in Haitian carnivals and street processions, such as those that take place during Easter. Creole accordion and violin are featured in the ode to the western region of Haiti, “Latibonit.” Wesli also honors his West African roots throughout the album, such as in his use of the kora on “Sonje.”

Wesli hopes that Ayiti Étoile Nouvelle will speak to his fellow Haitians, especially considering the significant obstacles many face in his homeland. He claims the album aims to “say something useful to society, not just entertain people.” Though the songs echo his ongoing frustration and sorrow, his music and his outlook express hope for “a better situation for Haitians and all African diasporic people.”