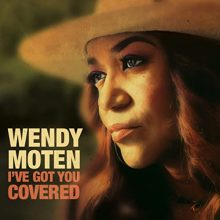 Memphis native Wendy Moten grew up singing in her father’s church and listening to her idols Aretha, Stevie, Marvin, and Dionne. After a successful solo career as an R&B artist in the 1990s, scoring a major hit with the power ballad “Come On In Out of the Rain,” Moten moved to Nashville where she became a highly regarded session and backing vocalist across all genres. Naturally, she was also immersed in country music. Over the past two decades, she has toured with Faith Hill & Tim McGraw (2005-2018), Martina McBride (2014-2016), and most recently Vince Gill, while also making her own debut at the Grand Ole Opry in 2019. After considering a country project for several years, Moten has finally released I’ve Got You Covered, a welcome addition to the very limited number of albums by Black female artists in country music.

Working closely with Vince Gill, who produced the album, Moten selected nine songs including classics from the ‘60s and ‘70s steeped in the story telling traditions of country music. Opening with Ernest Tubb’s “Driving Nails in My Coffin,” she keeps the original country flavor but adds a bit of soul to the vocals and moments of big band swing from the horn section featuring saxphonists Mark Douthit and Doug Moffett, trombonist Barry Green and trumpeter Mike Hayes. However, on songs such as Jeannie Seely’s “Don’t Touch Me,” Tammy Wynette’s “Til I Get It Right,” and George Jones’ “Walk Through This World With Me,” Moten stays within the boundaries of traditional country vocals of the era, but softened with a bit less twang and nasal timbre. Noted pedal steel guitarist Paul Franklin, guitarist Richard Bennett, and Charlie Judge on strings all make fantastic contributions to these songs. Fans of traditional country music are also sure to enjoy Moten’s interpretation of Dolly Parton’s “Each Season Changes You,” another showcase for Franklin on pedal steel.

Other highlights on the album are a soulful rendition of Bobby Gentry’s “Ode to Billie Joe” sweetened with strings, and Moten’s touching duet with Gill on a re-imagining of the Linda Ronstadt heartbreaker “Faithless Love.” The album closes with a fantastic, uptempo arrangement of the Mel Tillis hit, “I Ain’t Never.” Offering a complete change of pace, the song capitalizes on Moten’s many years as an R&B and gospel singer.

Speaking of the recording process for the album, Moten said, “It was my time to own this style.” Without a doubt, I’ve Got You Covered establishes Wendy Moten as a country music artist, adding yet another genre to the versatile singer’s discography.