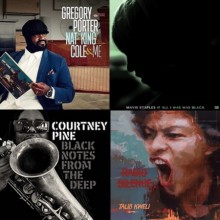 Welcome to the November 2017 issue of Black Grooves, sponsored by the Indiana University Archives of African American Music and Culture.

As protests continue around the country, artists are weighing in with socially conscious music. This month’s selection includes Mavis Staples’ If All I Was Was Black, Talib Kweli’s Radio Silence, and Christian rapper KB’s Today We Rebel.

Wrapping up this issue is the Gospelaires of Dayton, Ohio compilation Moving Up – The Early Years 1956-1965, Austin band Trouble In The Streets’ Electro Tribe, the legendary Lloyd Price’s latest release This is Rock and Roll, and our list of October 2017 Black Music Releases of Note.