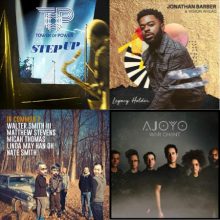 Welcome to the May 2020 issue of Black Grooves, sponsored by the Indiana University Archives of African American Music and Culture.

This month we’re celebrating the 50th anniversary of the great horn-driven funk band Tower of Power with a review of their 30th album, Step Up.

Blues releases include Reverend Shawn Amos & The Brotherhood’s Blue Sky, and a celebration of Chicago electric blues with Alex Dixon (son of Willie Dixon) on The Real McCoy.

The reissue of the month is the new compilation from Archeophone Records, At the Minstrel Show: Minstrel Routines from the Studio, 1894-1926, that includes examples of three complete minstrel shows, some featuring songs by African American composers and performers, with authoritative liner notes by Tim Brooks. Wrapping up this issue is our list of April 2020 Black Music Releases of Note.