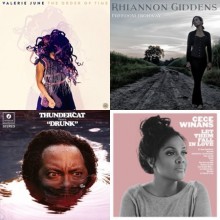 Welcome to the March 2017 edition of Black Grooves, sponsored by the Indiana University Archives of African American Music and Culture.

Other new releases include Thundercat’s eclectic album Drunk and Funk Box from the Atlanta-based group The Maxx.

Wrapping up this issue is our list of February 2016 Releases of Note.