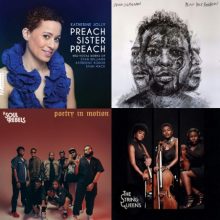 Welcome to the January 2020 issue of Black Grooves, sponsored by the Indiana University Archives of African American Music and Culture.