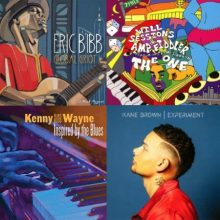 Welcome to the January 2019 issue of Black Grooves, sponsored by the Indiana University Archives of African American Music and Culture.

Also featured this month is Harbinger Records’ Sissle & Blake’s Shuffle Along of 1950 that draws from rare, one-of-a-kind acetate discs. And, since black-eyed peas are a New Year’s Day tradition, it seems fitting to include the Black Eyes Peas’ new album Masters of the Sun Vol 1.