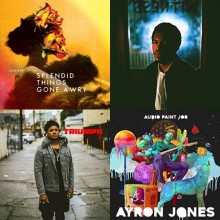 Welcome to the August 2017 issue of Black Grooves, sponsored by the Indiana University Archives of African American Music and Culture.

This month’s blues feature is the Sherman Holmes Project’s The Richmond Sessions, the gospel feature is Sure. Focused. Centered from NextGeneration Choir (St. Louis Shalom Church City of Peace), and the rap feature is Chris Rivers’ DeLorean.

Wrapping up this issue is our list of July 2017 Releases of Note.