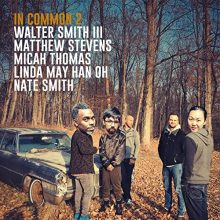 In Common 2 is the much-anticipated second release from tenor saxophonist Walter Smith III and guitarist Matthew Stevens. After the noteworthy success of their first collaboration In Common, Smith and Stevens assembled another star-studded cast featuring pianist Micah Thomas, bassist Linda May Han Oh, and drummer Nate Smith to perform their original compositions. Smith and Stevens are both at the nexus of the international jazz scene as performers, bandleaders, and composers, having performed and recorded with a wide range of artists including Ambrose Akinmusire, Christian Scott, Esperanza Spalding, and Roy Haynes. Their collaboration produces a high energy, dynamic album that sounds like a band that has been playing together for years.

The ensemble creates the impression of a live concert set, with thematic original compositions, fiery solos, and pulsating rhythmic grooves. The album opens with the only non-original tune, “Roy Allan,” a Roy Hargrove composition and tribute that feature Stevens and Smith in a short, interweaving duet. Other notable tunes on the album include “Lotto,” a motivic-based groove that features interweaving solo interjections from Stevens and Smith. “Clem,” based on a character from the video game Walking Dead, takes the listener on a saga-like journey through harmonic twists and turns. “Provinces,” a Stevens composition, is a texturally winding tune that reflects the Canadian landscapes where Stevens grew up. “General George Washington,” written by Smith, offers a political commentary on the controversial Founding Father with a play on a short rhythmic figure.

In Common 2 can serve as a masterclass in how to put together a cohesive and dynamic band performing original music. Walter Smith III’s and Matthew Stevens’ compositions blend together in a story-like way, and their styles of playing complement and embolden each other. Memorable melodies stick with the listener long after the album is over, and we can only hope that a third album release is on its way soon!