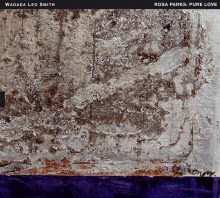 Wadada Leo Smith—trumpeter, multi-instrumentalist, composer, and improviser—is an acclaimed creative artist known for his music and his writings. His musical style, which he denotes as “Creative Music,” is inspired by social and political issues from the past and present that broadly affect the world we live in. One large work after another has been pouring out of Smith over the last decade, often with a social, political or environmental agenda attached, such as America’s National Parks and Ten Freedom Summers.

Rosa Parks: Pure Love is dedicated to the civil rights figure and activist and is in many ways a culmination of Smith’s multi-faceted, extensive body of work approaching the intersection of human rights, the potency of individual action in the arc of history, and spiritual expression. It also serves as a personal and political statement, acting as a reminder that the struggle for human rights and justice depends on the bravery and moral strength of individuals, but also requires grounding in history, intellectual astuteness, and hard-nosed pragmatism

An oratorio of seven songs, Rosa Parks features three singers (Carmina Escobar, Karen Parks, Min Xiao-Fen), each of whom represents Rosa Parks. They are accompanied by the RedKoral string quartet, the BlueTrumpet Quartet (featuring Smith, Ted Daniel, Hugh Ragin and Graham Haynes), and drummer Pheeroan akLaff, with electronics by Hardedge. There are also what Smith calls four “vision dances” (performed by Butoh-influenced dancer Oguri), choreographed to expand upon the meaning of the songs. A review of a live performance stated, “The music seemed to suspend the notion of time, rolling along in a slow-motion procession even when the musicians were playing rapid bunches of notes. Smith got our attention immediately with a dissonant blast from the four trumpets underpinned by a burst of free drumming.”

Smiths “non-linear” musical style is adjacent to Black peoples struggle for equality and justice. Rosa Parks: Pure Love forces us to reflect upon our journey from 1955, when Parks was jailed for refusing to give up her seat, to the present day when Black men and women are being arrested and shot for no reason other than being Black. Black people continue to fight to live in a white dominated society that does not value Black life. This album reflects Smith’s empathy and his solidarity with the fight towards a world where people of all colors and backgrounds treat each other with the same love and respect.