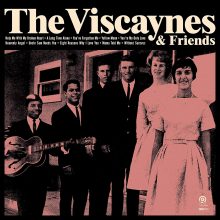 The Viscaynes & Friends from ORG Music is essentially a reissue of the tracks featured on the long out of print vinyl compilation, Spaced Out Sly, released in 1977. As many Sly Stone fans are likely aware, the young Sylvester Stewart cut his first singles in 1961-1962, both under his own name and with the Viscaynes, a multi-racial teenage doo-wop group formed by students at Vellejo High School in California’s San Francisco Bay Area. As Rickey Vincent relates in the liner notes, Sly was initially approached by classmates in the Viscaynes to assist with vocal harmonies, and they were so impressed with the multi-talented musician that they persuaded him to join their group. By that time, Sly had been performing gospel music for well over a decade and had also played guitar for other doo-wop and jazz groups. By 1961, the 18-year-old was a seasoned professional who led the Viscaynes to success with the single, “Yellow Moon,” which incidentally is backed by a band featuring saxophonist Jerry Martini, who would later join Sly and the Family Stone.

All four of the Viscaynes’ singles from their brief career are included on this disc, including Sly singing lead on “Heavenly Angel.” However, the main highlights are the three songs attributed to Sylvester Stewart. In particular, “Help Me With My Broken Heart” foreshadows Sly’s transition to rock a few years later. The songs on this anthology were produced by George Motola, who is the only apparent link to the three filler tracks including “Without Success” by the Individuals from 1959, and two songs from 1962 by the Precisions.

For those who want to experience the formative years of Sly Stone, as well as West Coast doo-wop, The Viscaynes & Friends is a well-produced album mastered from original analog tapes.