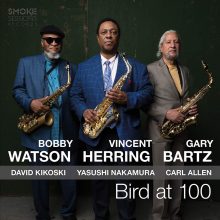 Saxophone legends Vincent Herring, Bobby Watson, and Gary Bartz present a tribute to Charlie Parker with their new release Bird at 100, which marks the 100 year anniversary of Charlie Parker’s birthday. Described as an “alto saxophone summit,” the album is a homage to the musical legacy left by Parker and contains a compilation of Parker’s tunes, popular standards, and new compositions. Recorded live over three days in late August and early September 2019 at the Smoke Jazz & Supper Club in New York City, the rhythm section features members of Herring’s regular quartet: David Kikoski (piano), Yasushi Nakamura (bass), and Carl Allen (drums).

Charlie Parker, also known as “Bird,” was a pre-eminent figure in the development of the bebop era. His flowing virtuosic lines and innovative harmonies inspired generations of saxophonists and jazz soloists to come. Parker had a major influence on all three saxophonists, all of whom have followed in his bebop tradition. Hence, the collaboration of these great players yields a highly innovative, creative, and insightful approach to Parker’s music. Describing the recording session, Vincent Herring states, “Here it is: his 100th birthday and we’re still celebrating and studying and being inspired by [Parker’s] music. There are a lot of great players but few innovators. Bird was a real innovator.” Following is a clip of the three performing at the Smoke Jazz Club’s Charlie Parker Birthday Celebration:

Bartz, Herring, and Watson are all major leaders, sidemen, educators, trail-blazers, and world-renowned jazz luminaries. Gary Bartz, a native of Baltimore, Maryland, became familiar with New York City when he attended the Juilliard School of Music in 1958. In 1965, he became a member of Art Blakey and the Jazz Messengers, and collaborated with Max Roach, Abbey Lincoln, and McCoy Tyner, among others. In 1970, Bartz joined Miles Davis’ band before forming his own group, Ntu Troop. Bartz is heavily influenced by the great John Coltrane, and that influence can be heard in his most recent solo album, Coltrane Rules, where he displays inventive melodic lines over a deep, hard swing.

Vincent Herring, born in Kentucky, relocated to New York in the 1980s, where he began touring with Lionel Hampton’s Big Band. He soon began a long partnership with Nat Adderley before collaborating with Art Blakey and the Jazz Messengers, Freddie Hubbard, and Cedar Walton. His distinctive soulful and swinging sound can be heard on many of his solo albums as well as with his band, The Story of Jazz Orchestra.

Bobby Watson, interestingly, was raised in Charlie Parker’s hometown, Kansas City, Kansas. Watson served as the musical director of Art Blakey and the Jazz Messengers in 1977, and worked with Max Roach, Louis Hayes, and George Coleman. Projects launched by Watson include Horizon, High Court of Swing (a tribute to Johnny Hodges), and the 29th Street Sax Quartet. Part of Bobby Watson’s legacy includes a lyrical style that is always deeply imbued with soul.

Bird at 100 features nine stunning tracks with compelling melodies, solos, and intriguing interplay among the band. The album opens up with “Klacktoveedsedstene,” an uptempo Parker tune that gives Herring, Watson, and Bartz time to shine. Each soloist adds his own personal touch to the chart: Herring with fluidity of line, Watson with soulful inflections, and Bartz with innovative melodies. The next tune, “Bird-ish,” written by Watson, is a contrafact over Parker’s well-known “Confirmation” that contains a three-part saxophone harmony and rhythmic interactions between saxophones and rhythm section. The third tune on the album, “Lover Man,” is a soulful rendition of the beautiful standard ballad reminiscent of the Parker version released on Dial in 1946. Following is “The Hymn,” which opens with an up-tempo piano solo before the saxophones enter with unaccompanied harmonies. This tune is perhaps an under-played Parker composition, so the group’s fresh take brings welcome recognition to this timeless theme.

Watson begins “These Foolish Things” with a beautiful winding sax cadenza that launches the rest of the ballad. “Folklore,” a composition by Vincent Herring, pays tribute to Bird and other major players of the bebop era including Nat Adderley. The tune features an up-tempo, twisting melody with saxes in harmony and rhythmic breaks in the rhythm section. “Bird Lives” is a tribute to the great alto saxophonist Jackie McLean, while “April in Paris” takes influence from the Bird with Strings album, and features Bartz in a beautiful melody up front that intertwines with Kikoski in the rhythm section. The final track, “Yardbird Suite,” is a very fitting tribute to one of Bird’s most popular standards, and a delightful way to conclude the album.

It is not often we get to hear three storied alto saxophonists coming together to perform in concert, much less record an album. It is a true honor to hear Bobby Watson, Gary Bartz, and Vincent Herring perform together to celebrate the music of the great Charlie Parker. Bird at 100 surely captures the spirit of Charlie Parker and recognizes the important innovations he made to the music of jazz. But Bird at 100 is more than a simple tribute album; it is three jazz masters continuing Parker’s legacy with respect, ingenuity, and hopefulness for the future.