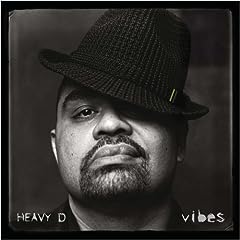 It’s been over eight years since the “Overweight Lover” released an album and it has been worth the weight (pun intended). Silky smooth singer/songwriter and astute businessman Dwight Myers, a.k.a. Heavy D, has re-launched his music career with the reggae album Vibes. Yes, that’s right, reggae! After all, he was born in Jamaica before coming to the U.S. at a young age, and claims “if you go back and follow my career, you’ll see that I’ve always had reggae influences.”

Myers became a household name in the late eighties with his group Heavy D & the Boyz, producing a slew of chart topping singles and gold records. The group was a crossover phenomenon with a style that appealed to both R&B and rap fans. During the nineties, Heavy D continued to pump out the hits while jockeying a record label executive position at Uptown Records. The nineties also saw him transition comfortably to stage and screen, appearing in a number of television programs as well as the Eddie Murphy/Martin Lawrence movie Life (1999) and the Oscar nominated Cider House Rules (1999). Myers acting career has continued  over the past ten years, landing him supporting roles on Boston Public (2000-2003), The Tracy Morgan Show (2003-2004) and the Fox television series Bones (2005).

Even though he admits that his rhyming skills have diminished considerably, Heavy D’s style fits nicely into the ‘Lovers Rock’ groove. Heavy D’s intention in making a reggae album goes well beyond record sales, he simply wants the music to get more recognition in the U.S.  He is currently in the process of becoming a board member for the National Academy of Recording Arts and Sciences, and intends to use the position to broaden America’s perspective on the genre. Vibes is just the album to make that crossover.