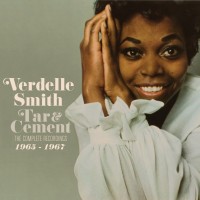 Florida born, Jersey bred gospel singer Verdelle Smith got her break in 1964 after auditioning for songwriters Paul Vance (“Catch a Falling Star”) and Lee Pockriss, who hired her to perform their R&B single “Juanita” (backed by “Life Goes On”), released the following spring on Columbia. Though the song failed to chart, they had much better luck with Smith’s pop-soul rendition of “In My Room,” leading them to quickly work up enough material to fill an LP.  Released in 1966 on Capitol, (Alone) In My Room included original songs, show tunes, and standards such as “Autumn Leaves” and “Over the Rainbow.” But it was the song “Tar and Cement” that was Smith’s most memorable hit and is included here in two versions: the original full length (recorded for the LP but left off at the last minute) and the 45 version. All 22 tracks on this compilation documenting her all-to-brief career were remastered from the original Capitol mastertapes in 2013, and are accompanied by a 20 page booklet with liner notes by Alvin Lucia.