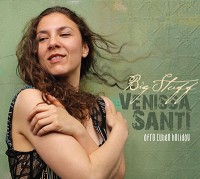 It is telling that much of what characterized many heterosexual relationships in Black communities during Billie Holiday’s heyday still remains true of some relationships in contemporary Black/Brown communities.  Ithaca-born Venissa Santi’s (granddaughter of Cuban composer Jacobo Ros Capablanca) homage to Billie Holiday, Big Stuff, uses the Afro-Cuban jazz idiom to paint a portrait of the great Lady Day as a “Blues Poet of Black Longing” (Amiri Baraka).  The album provides listeners with a surprising and poignant interpretation of Ms. Holiday’s melancholy repertoire, exemplifying her reality dealing with the lies, infidelity and violence that often accompanied her intimate relationships with men.

Listening to Santi’s Big Stuff can be likened to studying the social history of several Afro Cuban music and dance genres.  As Leonle Alvarado stated in his “Bolero: Sentimental Utopias, Modernity and Mestizaje,” the bolero has managed to adapt to different socio-historic circumstances without ever going out of fashion.”  This is best exemplified in Santi’s and Zayas’s setting of the political and graphic “Strange Fruit.”  Arranged as a bolero, Santi’s retelling provides younger generations with a lynching exposé, timely reminding us to critically think of our own past. “Strange Fruit” is an important addition to the historic transnational migration of bolero music as it formulates a discursive site of anger, longing and desperation in song.  Clave and cajon create a steady pulse to unify the lyrics in “You’d Better Go Now” and Santi’s delicate delivery of Holiday’s desperation to be seduced by love takes the listener on yet another journey of the slower rumba genre, yambú.  Finally, “Involved Again” is made quintessentially Cuban as a danzón with the vocalist bemoaning her foolish weakness for a past love.

(sigh) If “the half-life of love is forever,” then Billie Holiday’s lyrics and Venissa Santi’s Big Stuff will live on for an eternity.