Recorded live at various venues throughout the country, True Blues is a 13-song CD that “explores and celebrates the genre and follows its rich history from the Mississippi Delta of the early 1900s to the present day.” Producers Daniel J. Patinkin and Corey Harris assembled five top blues musicians to join Harris on the project, including Taj Mahal, Shemekia Copeland, Guy Davis, Alvin Youngblood Hart and Phil Wiggins, who are all equally dedicated to keeping the blues tradition alive.

The end result is a satisfying overview that’s weighted more heavily towards classics such as Willie Dixon’s “Hoochie Coochie Man” and Robert Johnson’s “Ramblin’ On My Mind”— the opening and closing tracks—performed by the group with reverence. Harris presents fine acoustic renditions of Sleepy John Estes’s “Everybody Ought To Make a Change” and Blind Blake’s “C.C. Pill Blues,” while Davis’s picks are “Saturday Blues,” originally recorded in 1928 by Ishman Bracey, and “That’s No Way To Get Along” (a.k.a. “The Prodigal Son”) from a 1929 recording by Robert Wilkins.  Hart, known more for his blues rock stylings, takes on Willie Johnson’s “Motherless Children Have a Hard Time” and “Gallows Pole,” a traditional song popularized by Leadbelly.  Wiggins (of Cephas & Wiggins) and Taj Mahal each perform two of their own songs, while Shemekia Copeland offers “Bring Your Fine Self Home” composed by her father, the late Texas bluesman Johnny Copeland. A companion documentary will be released on DVD later this summer, and it appears the group will reassemble for several tour dates in the fall. 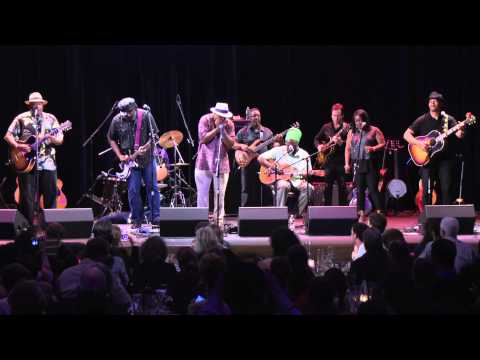