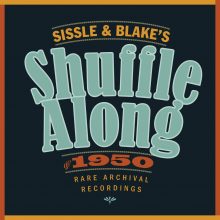 Two of the most famous early African American composers, vaudeville stars and recording artists—Indianapolis-born Noble Sissle (1889-1974) and Baltimore native Eubie Blake (1887-1983)—began their careers during the ragtime era. Joining Lt. James Reese Europe’s famous 369th U.S. Infantry “Hell Fighters” Band during WWI, they helped to promote an appreciation of Black popular music throughout the U.S. and Europe, especially the new genre known as “jazz.” After the war they experienced a number of successes, but none so great as their landmark musical Shuffle Along. Based on a comedy routine by their vaudeville colleagues Flournoy Miller and Aubrey Lyles, who wrote the book, the musical opened in New York in 1921 with Blake leading the orchestra from the keyboard. Though not the first Black show on Broadway (Bob Cole’s minstrelsy themed A Trip to Coontown and Will Marion Cook’s more progressive Clorindy both debuted in 1898), Shuffle Along became one of the most successful Broadway musicals of the era, drawing audiences with its swinging jazz melodies and “hot rhythms.”

In 2016, Harbinger Records released Sissle and Blake Sing Shuffle Along, featuring “recordings Eubie Blake and Noble Sissle made for Blake’s EBM record label, as well as a newly discovered set of extremely rare acetates of demo recordings by Sissle and Blake for a proposed Shuffle Along of 1950 Broadway show.” Songs were arranged in the original order of the landmark 1921 musical, performed primarily by Sissle (vocals) and accompanied by Blake (piano). Though there are many different cast recordings of Shuffle Along, what was featured on this 2016 release were the songs as sung by the original composers, recorded decades later. The album won a Grammy Award in 2017 for Best Album Notes, written by Richard Carlin and producer Ken Bloom.

Harbinger’s new release, Sissle & Blake’s Shuffle Along of 1950, was also produced by Ken Bloom (with executive producers Peter Shambarger and Steve Ramm). What’s offered this time around is a restoration of the aforementioned demo, recorded in 1950 to attract potential investors for the show’s revival on Broadway. Each song on the demo is proceeded by an introduction, with Sissle describing the plot and the stage settings. Sissle also sings most of the songs, sometimes in a duet with Charlotte Holloman, while Holloman is joined by Laverne Hutchinson on “Love Will Find a Way” and “Alone With Love.” Eubie Blake provides the piano accompaniment throughout.

Peter Shambarger, a record collector and former executive director of the Association for Recorded Sound Collections, obtained the two double-sided acetate demo discs from Ruth King, a Cleveland radio personality. As Shambarger explains in his “Notes on These Rare Recordings” (a six page addendum to the liner notes), King “knew Sissle & Blake personally as well as W.C. Handy and other African-American luminaries from the period.” He goes on to provide the recording history (or lack thereof) for every song on the demo as well as a chart listing the musical numbers, in order, for Shuffle Along (1921), Shuffle Along of 1950, and Shuffle Along of 1952. The chart indicates that many of the songs on this demo were not included in the 1952 revival on Broadway; others were never commercially recorded by Sissle & Blake, which means their only extant performance is on this recording. Shambarger’s notes also remedy a flaw of the 2016 release, which was a lack of discographic information on the source recordings.

Supplementing Shuffle Along of 1950 are bonus tracks drawn from another unique acetate disc recorded in 1950 as a tribute to Ruth King. The private recording features impromptu performances by Sissle, Blake, W.C. Handy, Billy Banks and Madeline Greene (who sang with Earl Hines), with Sissle acting as MC. These tracks alone make this CD a worthwhile purchase, providing jazz fans an opportunity to be a “fly on the wall” at this event.

Once again, the 24-page booklet accompanying the CD provides an excellent history of Shuffle Along by Richard Carlin and Ken Bloom, excerpted from their forthcoming biography of Eubie Blake. Though most of the songs on the demo follow the original 1921 version, the notes explain which songs were updated, which were newly composed, and how the script was tailored to fit the cast as well as the era (Pearl Bailey dismissed an early version as too “Uncle Tom,” and later dropped out). Most interesting, however, is the overarching story of Sissle and Blake’s efforts to mount a revival, which finally reached fruition in 1952. Along the way, they must court backers who have been warned by producers that a black show won’t be commercially viable, especially on the road.

Unfortunately, the 1952 revival of Shuffle Along was a flop, which Sissle blamed on the producers and writers who meddled with the script and music. However, we can still very much enjoy the significance of these historic recordings, which present Sissle & Blake’s original concept for the revival.