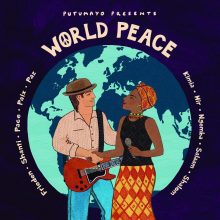 The 11 tracks on this album are performed by renowned artists from all over the world, including the late Nina Simone, India.Arie, and Wyclef Jean. World Peace is comprised of powerful ballads like Playing for Change’s cover of John Lennon’s “Imagine” and David Broza & Wyclef Jean’s performance of “East Jerusalem/West Jerusalem,” as well as faster paced, celebratory tracks like “Africa Unite” from Swaziland’s Bholoja and American Keb’ Mo’s bluesy rendition of “Love Train.”

Putumayo’s latest album emphasizes the importance of peaceful coexistence and freedom through the performance of talented artists worldwide. In support of this message, part of the proceeds from the sale of World Peace will be donated to the National Peace Corps Association.