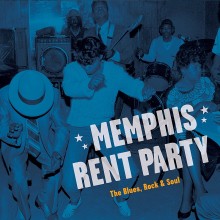 Memphis is a city known for its barbecue, rich musical heritage, and pride in being one-of-a-kind. This unique Memphis spirit is captured by twelve distinctly different tracks on Memphis Rent Party. The collection serves as a soundtrack for Grammy-winner Robert Gordon’s sixth book of the same title, Memphis Rent Party: The Blues, Rock & Soul in Music’s Hometown.

From a punk rock cover of Jimmy Cliff’s “Johnny Too Bad” to a bluesy collaboration between Luther Dickinson and Sharde Thomas, the album includes a wide variety of tracks that embrace the individuality of the Memphis music scene. Half of the tracks are drawn from unreleased material and the rest are a mix of covers and originals. Included are songs from barrelhouse piano player Mose Vinson, rock pioneer Jerry Lee Lewis, and the rockabilly-punk band Tav Falco’s The Panther Burns.

From modern day covers to a 1960s recording by pre-war blues musician Furry Lewis, Memphis Rent Party is a truly varied compilation.  Robert Gordon’s book was published by Bloomsbury on March 6, 2018 and is a must-read for anyone interested in the history of Memphis’ entertainment scene—just be sure to listen along to the soundtrack as you read.