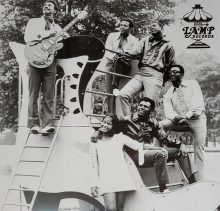 For those of you who aren’t from the Midwest, “Naptown” is a nickname created by local jazz musicians back in the day to describe the sometimes sleepy city of Indianapolis. Bringing some old Naptown soul and funk to light, the new anthology LAMP Records: It Glowed Like the Sun: The Story of Naptown’s Motown offers an overview of the city’s fabled record label, little known outside of hardcore soul collectors. Now, current and former Indianapolis natives can reminisce while the rest of the world can finally hear the soulful sounds that sprung from Naptown during the years 1969-1972. The liner notes for this release, researched and written over a twenty year span by Eothen Alapatt, Jeff Kollath, Jason Yoder and Kyle Long, read like a book as these four experts uncover the history of the LAMP label and Naptown’s music scene.

In the 1930’s and early ’40s, Naptown was known as the capitol of jazz in the Midwest. During this period, Indiana Avenue was the Broadway of Black Indianapolis. Stretching from New York Street northwest to the old City Hospital near the White River, Indiana Avenue was the center of black business and cultural life. Some of the era’s greatest jazz musicians and singers came to perform at the many clubs lining the Avenue, including Wes Montgomery, Freddie Hubbard and Earl Walker.

By the 1960s it was assumed by many around the nation that the Indianapolis music scene had died along with its clubs during the first stages of gentrification around the Indiana Avenue district. But Naptown had a successful black middle class that was thriving despite the institutionalized racism faced by many on their jobs, and they were still involved in the local music scene. During the rise of soul and emergence of funk in the ‘60s and early ‘70s, Naptown’s black community invested in clubs and record stores as patrons. Many also decided to record their own talents with the visionary founder of LAMP records, Herb Miller.

Herb Miller signed local acts such as the Vanguards, the label’s only charting group whose songs “Somebody Please” and “The Thought of Losing Your Love” hit the Billboard R&B Hot 100. While a few of LAMP’s artist gained some small measure of success, the label primarily catered to people who worked 9-to-5 jobs five days a week in middle class, Black America. Their focus was not on gaining fame as national recording artists; they were everyday people from the neighborhood who just wanted to cut a record.

Among those signed to LAMP was Pam Tanner and the Pearls. There were not many female acts on the label, but the Pearls were a strong creative group that made their mark in 1970 with the single “Can I Call You Baby” and “Shooting High.” Although this record did not get national airplay, it which quickly became a regional favorite on the WTLC radio station.

Perhaps best known due to recent reissues, the Ebony Rhythm Band served as LAMP Records’ house band and were they featured on the Vanguards and the Pearls releases. The group recorded many different songs for LAMP, including their own tunes such as “Soul Heart Transplant.”  The Ebony Rhythm Band left LAMP to tour the country and moved their home base to California, eventually changing their name to Ebony Rhythm Funk Campaign and taking singer Pam Tanner along for the ride. They were later signed by both Uni Records and Chi-Sound, but to Indianapolis natives, they will forever be known as a hometown success story.

As summarized in the liner notes, “Herb Miller served a critical role in the city’s burgeoning soul and funk scene, providing not only financial backing, but acting as a one-stop, record-making shop for artists that had, to that point, been doing it all themselves. He’s the Berry Gordy you’ve never heard of.” Lamp Records was a special place for Indianapolis locals and acted as the bridge for Naptown musicians who followed in the ‘80s and ‘90s such as Manchild, a band that would birth the stardom of music legend Kenneth “Babyface” Edmonds. Highly recommended!

Editor’s Note: Some of the musicians featured in this LAMP Records anthology were interviewed for the exhibition, “Soul and Funk: The Naptown Sound,” a collaboration between the Indiana Historical Society and the Archives of African American Music and Culture. Those interviews can now be explored via the collection finding aid.