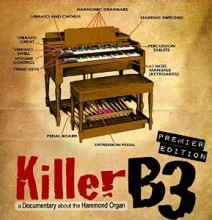 Title: Killer B3: A Documentary about the Hammond Organ

We just received a review copy of this fascinating 2013 film that has been making the festival rounds. The Kickstarter-funded Killer B3 explores the history of the instrument responsible for one of the signature sounds of the 20th century, an instrument that has animated church services, jazz clubs, and rock recording sessions since its introduction in 1935, the Hammond Organ.  The film’s punny title is a bit misleading: while the B3 is certainly the most popular model among the jazz musicians who play the bulk of the music featured in the film (which includes stellar performances by and interviews with Dr. Lonnie Smith, Tony Monaco, Joey DeFrancesco, and the legendary Jimmy Smith), the filmmakers take care to note that the B3 is just one model that conveys the signature Hammond Organ sound.

Killer B3 outlines the instrument’s story, from its design by clockmaker Laurens Hammond, who was looking to diversify his product line by selling an electric organ more economical than a pipe organ to cash-strapped churches, to the unique sounds that a variety of players have culled out of Hammond Organs. It focuses on the plethora of artists who adopted the instrument as the most essential tool in their toolbox, despite the organ’s 425 pound weight (and that’s not including the rotating Leslie speaker cabinet that most players deem necessary), which would seemingly be prohibitive to a regularly gigging musician.  While the filmmakers predominantly focus on high-profile jazz players who have brought this instrument to prominence, they also highlight the instrument’s important role in African American churches, and make important connections between the Hammond’s use in the church and the jazz club. (It is important to note that they don’t talk much about the rock musicians who adopted the organ’s signature sound, which may be the subject of a second installment, according to hints being dropped on the documentary’s Facebook page.) The filmmakers note the Hammond Organ’s widespread popularity, tracing the instruments’ history and key players around the country, from Chicago to Florida, New York, and Philadelphia. 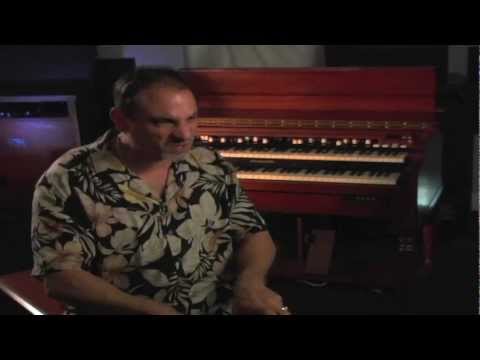 The film’s directors Murv Seymour and Joe Branford interview players, people responsible for maintaining models from the original Hammond line (the company ceased producing the original organs in the 70s, and reconstituted the line with digital models in 2003), as well as other experts and aficionados, about the Hammond’s impact on a variety of players. They craft a compelling narrative, albeit skewed to focus on the organ’s use in jazz. They also highlight the seeming accelerating loss of key Hammond players, highlighting the loss of several major figures passed away during the period in which they filmed this documentary. While certainly not an exhaustive treatment of the subject, Killer B3 is a great introduction to the instrument and some of its key players.

For those considering streaming the film or purchasing on iTunes, think twice! Instead, buy a physical copy of the documentary.  Not only does the DVD version include a featurette on how the directors made the film, but it also includes 36 minutes of additional performance footage, which are worth repeated viewings to see masters and hear of their craft at work. .