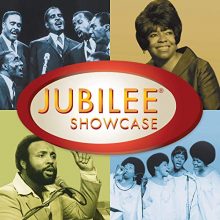 Chicago was the birthplace of two of the earliest gospel music television series. The half hour syndicated show TV Gospel Time aired on NBC Sunday mornings from 1962-1965, and a 2-DVD set of selected programs was released in 2010 under the title Soul of the Church. Now, ten years later, Time-Life Music is releasing “36 raw, live performances” from the more famous Emmy® Award winning series, Jubilee Showcase. Created and hosted by Sid Ordower, a Jewish civil rights and labor activist, Jubilee Showcase aired on ABC’s Chicago affiliate, WLS Channel 7, from 1963 to 1984. These programs introduced gospel music and Black culture in general to a much broader audience during the peak years of the Civil Rights Movement.

This Time-Life release is available as a streaming-only album (sorry, no video at this time), and features the most famous gospel artists of the era, including Sam Cooke, The Staple Singers, The Mighty Clouds of Joy, Andrae Crouch & The Disciples, Shirley Caesar & The Caravans, Inez Andrews and more.

To learn more about the extraordinary Jubilee Showcase series and Sid Ordower, visit the program website, or watch the trailer for the proposed documentary: