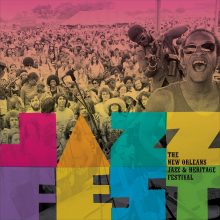 In addition to the wide-ranging live performances, this collection includes an accompanying book with chapters written by George Wein, Keith Spera, Rachel Lyons, Karen Celestan, Robert H. Cataliotti, Dave Ankers, Jeff Place, and Jon Pareles, which document the origins of Jazz Fest and cultural heritage, as well as Louisiana culinary traditions. Another great feature of this box set is the way the song selections reflect the musical order of the Jazz Fest itself. Like the festival, the five disc compilation begins with a performance of “Indian Red.” A tradition in New Orleans, according to the authors, this song “is sung at the beginning and end of Mardi Gras Indian gatherings…and it takes on the role of a prayer, invoking ancestors and calling members of the masking together.” After this sonic representation of the call-and-response interaction between The Golden Eagles, who call “Mighty coo de fiyo,” and the audience’s response, “Indian red, Indian red,” we hear the voice of Larry McKinley—radio host and the voice of Jazz Fest—welcoming us to the festival.

What comes next is an eclectic list of music performances by New Orleans/Louisiana artists. From the solo blues performance of  “Bring Me Flowers While I’m Living” by “Champion” Jack Dupree that transitions into a boogie-woogie duet with Allen Toussaint on “Rub a Little Boogie,” to the vibrant medley “Iko Iko/Brother John/Saints Go Marching In” by the Dixie Cups, and the funk/Jamaican dancehall fused groove of the Funky Meters “Fire on the Bayou,” the compilation recreates the feeling of experiencing these various groups and music genres live while moving from stage to stage. Of course, I’d be remiss if I did not mention the inclusion of Dural Jr’s energetic zydeco performance of “Hard to Stop,” or the Savoy Family Cajun Band’s lively rendition of “Midland Two-Step”—two performances that certainly embody the zydeco and Cajun (New Orleans/Louisiana) music traditions. Finally, I must acknowledge the heartfelt medley “Amazing Grace/One Love” sung by The Neville Brothers. Putting this song at the very end of the box set is fitting and symbolic because it was the concluding song of the Jazz Fest for many years.

The Jazz Fest certainly “captures the festival’s ecstatic spontaneity.” This collection does a phenomenal job at presenting Louisiana’s musical diversity while recreating the experience of what a day is like on the grounds of the New Orleans Jazz & Heritage Festival. This is definitely an anthology that fans will enjoy and cherish!