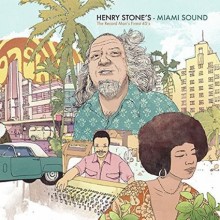 Label: AOTN (Athens of the North)

Miami-based record executive, producer and distributor Henry Stone (1921-2014) served as the main force in Florida’s soul and disco industry of the 1970s. As the head of T.K. Records, Stone contributed to nurturing the ‘Miami Sound’ in countless ways, encouraging the talents of local singers and musicians from in and around Miami, many of whom had little hope of becoming as big as T.K.’s top act, K.C. and the Sunshine Band. Nevertheless, in the current context there is a growing interest among listeners in second-tier soul, and Stone’s catalog represents a wellspring of it. Henry Stone’s Miami Sound pulls together between 18 and 20 tracks of varying content and quality, none of it familiar, in order to convey an overall impression of Stone’s many-faceted activity. It is a boon to those not willing or able to shell out big bucks to own original vinyl 45s of this material, and indeed it would take a fair amount of involved research just to know what they are, and where to look for them.

Although the slipcase refers to Stone as “the king of disco,” this collection is mostly made up of soul and soul-pop, with a little bit of expected T.K. disco style creeping in at the end. The content and artist pool on Henry Stone’s Miami Sound ranges very widely, yet there are some common threads. Stone’s early contact with King Records, both as an outpost producer and talent scout, included a close personal association with James Brown whose long shadow is operating through a lot of this music, such as in Raphael Munnings’ “Sleep On, Dream On” and Oceanliners’ “Cutting Room (Hot Pants).” Although the lead-off track, Little Beaver’s “Concrete Jungle,” is an exception, very little of this material shares James Brown’s, or latter-day Motown’s, interest in topical or socially conscious ideas; love and romance are the dominant themes here. A big standout is Johnny K’s screamingly funny “I Got Bills to Pay,” which provides a welcome point of departure from the lay-it-on-me-baby, you-knock-me-out prattle that typifies many of the lyrics. Miami’s natural cultural connection to Latin music—and, therefore, its position as an incubator to disco—intersects the collection occasionally, most strongly in Funky Nassau’s “Bahama Soul Stew.”

Some of Henry Stone’s Miami Sound is a little underwhelming in that it reflects its sources too closely; although the extra 45 in the vinyl version is the vaunted “Thousand Years” by Brand New—a fabulously rare single—the song itself is a too-thinly disguised knock-off of Cornelius Brothers and Sister Rose’s “Too Late to Turn Back Now.” After a few tracks in, it becomes clear that in general the quality of singing is a bit below the level of arranging and backing musicianship, which may explain partly why some of these things didn’t catch on. Lynn Williams’[i] “It Takes Two” is largely sung off-pitch, even as the vocal conveys some measure of lazy, relaxed charm; in contrast, the backing track jams mightily. But this often yields dividends anyway; Leno Phillips’ just-okay vocal on “Confusion” is countered by an arrangement which is straight up sublime. Henry Stone’s Miami Sound summarizes a singular subgenre within American popular music without resorting to obvious choices, which is a bonus, though one misses Timmy Thomas’ incandescent “Why Can’t We Live Together.” For listeners that survived the seventies, the first pass through Henry Stone’s Miami Sound may not reveal all of its virtues, depending on how much baggage and formula one may still bear from the era, and it well may appeal better to hearers not inundated with exposure to 1970s AM radio. Stone, however, did strive for individuality and his productions are a testament to this tight-knit community of talented people; not making a fortune, but creating a lot of music mainly for the fun of making it. And who knows? Maybe we’ll get a hit out of this.

[i] Lynn Williams is the daughter of singer Hank Ballard.