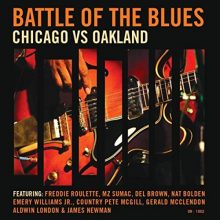 Drummer, songwriter, and producer Twist Turner has worked for nearly six years on his latest project, Battle of the Blues: Chicago vs Oakland. Not only did this certified blues man write 11 original tracks and play the drums for the album, but he also mixed and produced it for his own label, Delta Roots Records. According to Turner, the project was originally inspired by his desire to “produce a recording of the unknown and underappreciated blues men and women of the Bay Area.” Oakland, an often-overlooked focal point of the West Coast blues and jazz scenes, was Turner’s home for six years. After relocating to Chicago, however, Turner expanded the project to also highlight seasoned blues artists from both of his home cities.

Over 30 musicians from Chicago and Oakland perform on the album, which features bassists/vocalists Aldwin London and the late Country Pete McGill, lap steel guitarist Freddie Roulette, and vocalists Mz. SuMac and 91-year-old Nat Bolden from the Bay Area, and the late rhythm guitarist/vocalist Emery Williams Jr. (Von Ryan’s Express), bassist James Newman (Magic Sam), and vocalists Gerald “Soulkeeper” McClendon and Del Brown from Chicago. Some of these tracks date back to the 1990s, capturing the artists at an earlier stage of their careers, and encompass a broad definition of the blues as “a living, breathing thing constantly evolving.”

The respect Twist Turner has for these local blues scenes is evident in every part of Battle of the Blues, notably the omission of his name in the cover art to truly highlight the talents and contributions from fellow musicians and friends who inspired this project.