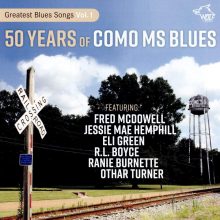 Many of the tracks on this anthology have never been released and were recorded by producer Hannes Folterbauer in the homes of the musicians during his trips to Como in 1975, 1991, and 2017. The exception are the tracks featuring Fred McDowell and Eli Green, which were all originally issued on the Smithsonian Folkways album You Gotta Move (1989).

50 Years of Como Ms Blues is a fine introduction to the hill country style within a narrow geographical region, tracing the lineage of performance practices from one generation to the next. Biographies of each musician and discographic details are provided in the liner notes.