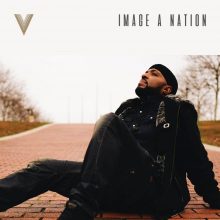 Philadelphia R&B/soul singer, songwriter and producer Valvin “V” Roane is making his return with Image a Nation, his first full-length project with Barely Breaking Even (BBE Music) in 15 years. In collaboration with production partners Jontae Slade, Andre Capers and Yameen Allworld, V creates an album that colorfully illustrates the changes in the world around us through both the lyrical and melodic structures within the project.

V says in an interview, “Synchronicity played a major factor in the themes and tone of both lyrics and music. We found ourselves telling a magical story of life as a voyage or trip, learning to avoid the pitfalls—forever reaching to find that ”utopia” but being tested as you go through a maze of obstacles.” This theme is encapsulated with songs like “Power to the People,” “Hell Won’t Go” and the album single, “Into the Light,” describing the power that community and unity provide when struggling through adversity. Other highlights include V’s new arrangement of the classic protest song “We Shall Overcome” and the title track “Image a Nation,” that provides encouragement and optimism for a brighter future.

Image a Nation is an enjoyable neo-soul project, created with more in mind than just a relaxed listen. Given the recent social and political climate, the album expresses a well-timed message that while everyone may have the ability to create change, only when working in tandem with one another will true and effective change occur.