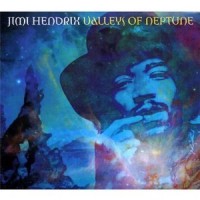 Jimi Hendrix’s Valleys of Neptune is bound to have something of a polarizing effect amongst potential buyers and listeners.  Claiming to be a collection of previously unreleased material, it will obviously pique the interest of Hendrix fans.  Even a glance at the contents, however, would raise suspicions in those same fans’ minds.  This brand new Hendrix album opens with “Stone Free?”  “Fire?”  “Red House?”  Haven’t we heard these before?  As it turns out, we only think we have, but this is new music that deserves to be appreciated on its own merit, and “Valleys of Neptune” is a truly meaningful addition to the sprawling Hendrix discography.  It does not redefine Jimi Hendrix, nor does it shine a clear light on future aspirations or musical developments.  It is not a magical, missing piece to the puzzle.  It is, however, a thoroughly vibrant, captivating collection of Hendrix’s later studio recordings, and it presents with beautiful clarity a level of musicianship that justifies his legendary status.

With the release of Valleys of Neptune, fans of Jimi Hendrix are presented compelling interpretations of familiar songs as well as genuinely new lyrics, song structures, rhythmic flows, and ensemble playing dynamics.  New material, such as the title track, “Valleys of Neptune,” and “Ships Passing Through the Night,” move through a variety of tones and textures, switching back and forth between reflective interludes and charging rock cadences.  Considering the numbers of bootlegs, box set retrospectives, “best-of” collections, and sketchy import discs that are on my shelves, to say nothing of the classic studio albums released during Hendrix’s lifetime, I was surprised to hear how much of the present album sounded fresh to me.  And, despite the centrality of Hendrix’s widely recognizable, signature guitar playing, this is not an album that melts into a caricature of itself after the first couple tracks.  I found that through its effective sequencing, inclusion of a few strong instrumental numbers, and casting of Jimi’s vocals in a variety of sonic settings, the album actively asserts itself and commands attention as a complete, multi-faceted whole.

Following is the official trailer for the album (© 2010 Sony Legacy/Experience Hendrix LLC):

–
Of course, a handful of tracks are trusty blues warhorses that Hendrix had performed and/or recorded countless times in his short career.  But, just like painting a self-portrait, Jimi Hendrix uses the familiar territory of the blues to reveal his supreme expressive abilities, and consequently to reveal his ongoing creativity and musical development.  A highlight on the album is “Hear My Train A Comin,’” which showcases Hendrix’s unmatched ability to fuse his vocals and guitar playing into a seamless outpouring of emotion.  Elmore James’ old “Bleeding Heart” is substantially altered with a new feel and structure, and the new “Crying Blue Rain” extends the blues format while exploring a wide range of guitar tones.  Throughout the album, Hendrix re-confirms an organic relationship with his guitar that seems so intimate and complete that his subtlest thoughts – including stutters, Freudian slips, memories, anxieties – are channeled unfiltered through his amplifier.  I can think of no other guitarist whose connection to the instrument is so eerily alive, and this album offers more raw evidence of that connection than most.

Close reading of the liner notes reveals instances of more recent overdubbing and editing conducted long after Hendrix’s death.  And, some of the tracks are little more than new efforts at mixing raw tracks that have already been released in some form or another as part of earlier projects.  The involvement of Eddie Kramer as the engineer largely voids any criticisms, though, as he is singularly qualified to do this work with confidence and authority.  To Kramer’s credit, the sound quality of the album is terrific, and there is a vitality to these tracks which presents an intimate and immediate experience of Hendrix’s music forty years after his death.

Some people may think that every one of Jackson Pollock’s infamous “drip” paintings looks basically the same.  Some may think each of Michael Jordan’s slam-dunks was more or less the same.  Some people will think that Valleys of Neptune is just one more hour of distorted Stratocaster riffing and redundant blues songs.  Sadly, they will miss the fascinating details and nuances that flow from genuine masters of creativity, performance, and artistry, even when executing the most rudimentary or familiar tasks.  Valleys of Neptune should do nothing but revalidate Jimi Hendrix’s legacy as one of those rare masters, and the tracks on the new album could likely prove as memorable as others that have a forty-year head start.