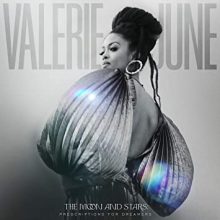 Valerie June’s The Moon and Stars: Prescriptions for Dreamers is an amalgam of genres, referencing 1960s psychedelia, 1980s pop, gospel, Americana, and especially Memphis soul. The connection to Memphis, where June began her career, is evident throughout, from an appearance by Carla Thomas to sessions recorded at Sam Phillips Studio and Royal Studios. Like this album, Memphis is a melting pot of styles, and the instrumentation on The Moon and Stars is just as diverse as its stylistic influences—from lush strings to horns, pedal steel, and banjo. Jointly produced by June and Jack Splash (Alicia Keys, Kendrick Lamar, John Legend), the fourteen tracks of original music have all of the elements necessary to guarantee success.

“Stay,” the opening track, begins with the sound of a juke joint piano that is slightly out of tune. As the album progresses, this slight imperfection reveals itself to be part of June’s message of seeing the positive in everything. The instrumental arrangement of this track, which features strings and flute, is reminiscent of the lush recordings of girl groups from the early 1960s.

Following is “Stay Meditation,” which is as peaceful as its title suggests, and is the first of several tracks that June said she included as “reflective meditation moments.” “Starlight Ethereal Silence” is also ambient and pensive, while “African Proverb,” featuring spoken text by Carla Thomas, serves as a meditative introduction to “Call Me a Fool.”

Stax legend Carla Thomas provides backing vocals on “Call Me a Fool,” which pays homage to that legendary Memphis soul label. Though one can hear the Stax influence, “Call Me a Fool” is a modern take on a Memphis soul song with June’s distinctive touch and production. “Stardust Scattering” also has a heavy soul influence with its organ and Memphis-style horns, yet its haunting ambience separates it from that genre. “You and I” displays some African music influences in the opening vocal melodies and electric guitar rhythm towards the end of the track, yet the song as a whole is probably best placed in the nebulous category of Americana. This stylistic ambiguity applies to all of the tracks, which is one of the album’s most endearing qualities.

“Fallin’” stands out amidst all of the production and instrumentation heavy tracks for its simplicity, featuring June on vocals accompanied by acoustic guitar. Relatedly, “Smile” and “Within You” pair June with several instruments, but the overall sparse instrumentation focuses listener’s attention on the vocals.

For all its musical genius, there is a message conveyed on multiple levels. June has said that she hopes this album helps people “connect with each other in a kinder and gentler and more loving way.” Demonstrating that there is beauty even within the shortcomings of being human, the album begins with a human imperfection (the out-of-tune piano) and closes with the peace and beauty of nature: “Starlight Ethereal Silence” features mockingbirds recorded outside June’s window while she was quarantining in Tennessee.

The Moon and Stars: Prescriptions for Dreamers is a brilliantly produced album that features outstanding original songs and the immediately identifiable voice of Valerie June, with a raw beauty that is both musical and spiritual. Equal parts soul, psychedelia, rock, country, and folk, the album references American music history and African American contributions, but the project is undoubtedly modern and stylistically unique. It is not often that an album comes along that displays so many influences, but given June’s West Tennessee roots, this is not a surprise. Though it is still the first quarter of 2021, there is little doubt that The Moon and Stars will remain one of the year’s best.