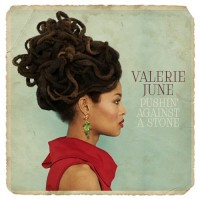 Title: Pushin’ Against A Stone

With Pushin’ Against a Stone, Valerie June enters that pantheon of singers with truly distinctive, instantly recognizable voices (not to mention her distinctive free-form locks).   And people are, indeed, taking notice. Her countrified Tennessee twang is the perfect foil for banjo, guitar, and ukulele, all of which she’s mastered over the course of her 31 years. And with influences ranging from Bessie Smith, Elizabeth Cotton, and the Carter Family to Whitney Houston, Tracy Chapman, and Latasha Diggs, you can expect distinctive songwriting as well.

In order to understand June’s unique style of roots music—drawn from Southern soul and spirituals, traditional folk, rural country, and Delta blues—one need look no further than her hometown of Jackson, Tennessee.  Situated about equal distance from Nashville, Memphis, and Muscle Shoals, it should be no surprise that Jackson was the birthplace of blues musician Sonny Boy Williamson and soul singer Luther Ingram, as well as the home of rockabilly legend Carl Perkins and several country singers.  The cross-pollination between African American musicians and those of European descent is a long-established tradition in this region, leading to frequent borrowings across genres. June has tapped all of these roots and branches while deftly avoiding the music industry’s tendency to market singers in genre specific (not to mention race specific) packages.  Not that it was easy—her 10-year struggle is reflected in the title Pushin’ Against a Stone.

June wrote about half the songs with Dan Auerbach (The Black Keys), who also served as one of the producers and guitarists on the album, which opens with “Workin’ Woman Blues,” an acoustic folk-rock song that concludes in a flurry of jazzy trumpet riffs.  On the winsome “Somebody To Love,” June’s voice drifts over fiddles and ukulele in a slow waltz, growing more emphatic midway with the support of a harmonizing chorus over the organ of Booker T. Jones.  “Wanna Be On Your Mind” employs subtle vocal inflections and echoing overlays, while “Tennessee Time” is a slow, deliberate string band waltz punctuated by the twang of steel guitar. Another highlight is “Shotgun,” which draws from murder ballads of yore and is sung in a compelling, improvisatory manner accompanied only by June’s chugging bottleneck guitar.

The stellar title track is pushed to the middle of the album, where the reverb heavy vocals and trippy psychedelic guitar provide a refreshing change of pace. In sharp contrast is “Trials, Troubles, Tribulations,” a simple folk-spiritual sung as a duet between June and Auerbach, which segues into another album highlight, the rocking “You Can’t Be Told”:

Pushin’ Against a Stone is expertly sung, arranged, produced and sequenced, with a refreshing variety of styles that coalesce around Valerie June’s compelling vocal timbres. Highly recommended.