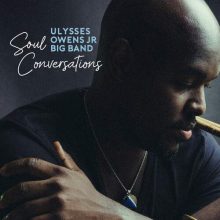 Drummer and composer Ulysses Owens Jr. is a name to remember in the world of music. Renown for his work with artists such as Christian McBride, Wynton Marsalis, Gregory Porter and Kurt Elling, Owens has also had the opportunity to engage in academic roles, teaching jazz at Juilliard and during residences at other institutions such as the Park Avenue Armory Conservancy and the world-renowned Abyssinian Baptist Church. His new release, Soul Conversations, is the recording debut of his new 19-piece UOJ Big Band, a multigenerational, multi-gender and multi-ethnic ensemble that continues Owens’ tradition of mastery in jazz as culture.

Soul Conversations is full of exhilarating and breathtaking tunes that will have you on your feet dancing at some moments and thinking critically about the state of the world in others. Owens said, “I finally feel like I have a record that is emanating a sound that I can confidently create forever.” Let’s hope he continues to release similar projects featuring his exuberant, soulful brand of big band jazz.