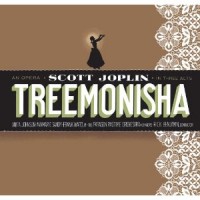 The Paragon Ragtime Orchestra is doing truly esteemable work in its anarchronistic goal to re-create the sounds of “America’s Original Music,” that of early 19th century film, theater and dancehalls. While a resurgence of interest in ragtime music is nothing particularly new, the PRO does something very rare amongst its contemporaries by giving special focus to the music of African American composers. While this may seem like an obvious option since ragtime was a genre created by African Americans, both historical sheet music and contemporary interest are rare, outside of the works of “big name” composers such as Scott Joplin and Jelly Roll Morton. The PRO’s most recent release, however, is a beautifully crafted full recording of Scott Joplin’s never-fully realized opera Treemonisha.

Treemonisha was Joplin’s magnum opus, a classical/ragtime synthesis of Wagnerian proportions. Scott Joplin, perhaps best known as The King of Ragtime, had dreams of establishing ragtime not as a popular music genre, but as a respected form of American classical music. Pushing his dreams even further, Joplin envisioned his opera, Treemonisha, as a gateway into classical music for working class African American audiences, a chance to see their music and dance traditions melded with what their contemporary society referred to as “refined” and “cultured” music, within Western opera tradition. Due to the constraints of his time and also the happenstance of bad luck, Joplin never got to see Treemonisha performed as he envisioned.

The 1970s saw a resurgence of interest in Joplin and with that came his establishment in the American popular mind as a composer of note and repute. When classical musicians discovered he had composed an opera, the desire to reconstruct and perform it was unstoppable.  In May 1975 the Houston Grand Opera commissioned a reconstruction from composer Gunther Schuller. This verision briefly ran on Broadway and aired on PBS. It is currently the most well known version, and in many eyes is Treemonisha.

What the PRO offers, however, is a restoration as opposed to a reconstruction. Rick Benjamin—the conductor, composer and arranger of this recording—has gained a great depth of knowledge on 19th and early 20th century African American musical theater. He was disappointed that all the new, finished versions of Treemonisha revised the music, dance and design with an eye towards “evaluating” the style to Grand Opera and not creating, with historical accuracy, the opera that Joplin composed. With this in mind Benjamin spent five years fact-checking for performance practice, deciding on the orchestral makeup and recreating the missing orchestrations with the help of his nine-thousand-title collection of historic theater orchestra arrangements. This recording is beautifully packaged with a book of over one hundred pages, filled with rare black and white historic photos of Joplin and the musical players of his day, in which Benjamin recounts both the lengthy history of Treemonisha in Joplin’s hands and the process of Benjamin’s restoration, including historical explanations for all the musical decisions therein.

All this talk about historical accuracy is well and good, but now it’s time to get to the nitty gritty: how does it sound? Restoring historical pieces may be useful to the academics amongst us, but can one listen to this album just for pleasure?

The answer is a resounding, yes. The 19th century style small theater pit orchestra provides an interesting and infectious background to the strong singing of the performers, who expertly navigate the dialect lyrics as written by Joplin in a manner that does not patronize and sounds as natural as hearing Verdi in Italian. Joplin’s story of the Reconstruction in the rural south and the battle between superstition and education is finally captured in a manner that pulls the listener in and that fully synthesizes African American folk and popular music with Western classical music. The syncopated accompaniment to the antiphonal vocals in “We’re Goin’ Around” and “Aunt Dinah Has Blowed De Horn” call to mind the field holler, as was Joplin’s intention, but also have the feel of ragtime and the grand presentation of an operatic showstopper. Perhaps most impressive, though not as catchy as the aforementioned pieces, is “Good Advice,” a church scene sung by the character Rev. Alltalk and a chorus by way of congregation. While a scene that captures a worship style native to African Americans may not seem that unique or challenging to 21st century listerners, when placed in the context provided by Benjamin it is both brave and admirable.

As a scholar who focuses on African American musical theater in the 1890s, I have found this recording to be a very precious thing, presenting music that is both historically accurate and a pleasure to listen to. I have played excerpts from the PROs recording of Treemonisha during presentations on theater music from this era and converted the staunchest modernists and experimentalists and believe me, if you give this recording a chance you will find yourself enchanted by the music and curious enough to read through all 106 pages of notes!

Editor’s Note:  the Paragon Ragtime Orchestra has previously released other stellar performances of African American theater music, including Black Manhattan: Theater and Dance Music of James Reese Europe, Will Marion Cook, and Members of the Legendary Clef Club (2003) as well as From Barrelhouse to Broadway: The Musical Odyssey of Joe Jordan (2006).