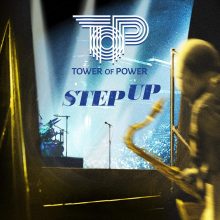 Although the band went through a “rough patch” in the 1980s, TOP’s five-piece horn section remained in high demand and recorded with the likes of Elton John, Phil Collins, ToTo, and many more. The horn section has always been the most stable part of the band and still includes founding members Castillo and Kupka, who are joined on this album by longtime members Tom Politzer (lead tenor), Adolfo Acosta (trumpet), and Ray Green (trombone), plus recent addition Sal Cracchiolo (trumpet). TOP’s new lead singer, Memphis native Marcus Scott, proves he is up to the challenge, filling the shoes of the group’s previous singers such as Ray Green (who is still featured on tracks 2, 4, 5, 9, 10, 12), Rufus Miller, Rick Stevens, Lenny Williams and Brent Carter. Other band members on this album include two more founding members, David Garibaldi (drums) and Rocco Prestia (bass), plus Roger Smith (keyboards) and Jerry Cortez (guitar, sitar, lap steel).

With Scott on lead vocals (on tracks 3,8,13), TOP continues to deliver that “sweet soul music.” The band, along with Grammy-nominated producer Joe Vannelli, recorded enough great material over a six-year period for two full albums and decided to split the material up, releasing the first half as Soul Side of Town in 2018.  Step Up, on the other hand, was a bullet in the chamber waiting to be shot into the new decade.

“Look in My Eyes,” TOP’s first music video release in three decades, showcases the band’s musicality. The track is full of their signature funky and rhythmical sound, with melodic lines flawlessly and soulfully executed by the horn section and Cortez’s guitar, topped off with a killer keyboard solo by Smith. “Addicted to You” is a powerful old school love balled featuring former lead vocalist Ray Greene. The beautiful heartfelt lyrics send a message of love and warmth with a sound reminiscent of an old R&B ballad, backed by expansive string and synth parts.

“Any Excuse Will Do” is a fun and funky groove written and arranged by Kupka, Lenny Pickett and Dave Eskridge. The song, however, has strong social and politically charged lyrics: “There is so much blame going around and everyone is looking for an excuse to hate something and somebody.” One might wander with all this blame going around how many issues are actually being solved?  Castillio notes that “Doc wrote this one with Lenny Pickett and Dave Eskridge did a fantastic job arranging. It’s up, it’s funky, it’s got really clever lyrics – that’s Doc – and it talks about all the various hatreds in the world. There’s just such tremendous musicality in this one throughout, especially at the ride-out.”

Tower of Power has certainty released one of their best albums yet and the sky is the limit to where they will go next. After 50 years and 30 albums, Step Up proves that Tower of Power still has “Soul with a capitol S.”