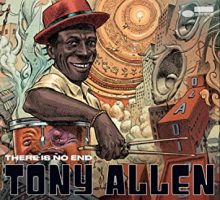 One could not ask for a more powerful posthumous album than Tony Allen’s There Is No End. The legendary Nigerian-born Afrobeat drummer and former musical director of Fela Kuti’s Africa ’70 group died last April at the age of 79. In the past two decades, Allen had become known for his eclectic collaborations, seamlessly moving from jazz to highlife, and funk to hip hop and electronica. Such is the case with this new release, featuring the Afrobeat elder engaging with younger singers and rappers who represent the full spectrum of the African diaspora including Sampa the Great, Danny Brown, Lava La Rue, and more.

The album’s title encapsulates Allen’s spirituality as well as his philosophy on musical partnerships: “I play yours, you play mine. The music never ends.”  By engaging a new generation of rappers, Allen not only creates rhythmic complexities and fantastic fusions, but also provides these artists with a platform to voice their own socio-political concerns in a world reeling from turmoil. “Cosmosis,” featuring Nigerian poet Ben Okri and British rapper Skepta, underscores the concept of the album, perhaps best summarized as the spontaneous movement of sound through the cosmos into a region of higher power and concentration.

Zambian-Australian rapper Sampa The Great, featured on the album’s second single “Stumbling Down,” comes on strong with the Afrofuturistic message: “Just wanna see a side of space / Just wanna see a space / I know I won’t be limited by race.” Other female artists include British Jamaican singer Lava La Rue on the high energy ode to rhythm “One Inna Million” and Kenya’s Nah Eeto on “Mau Mau,” fusing her hypnotic vocals over intricate beats.

Other contributors include rappers from across the U.S.  Detroit is represented by Danny Brown on “Deer in Headlights” and Zelooperz’s socio-political track “Coonta Kinte” that incorporates the Black Lives Matter slogan “no justice, no peace.” From Los Angeles, Koreatown Oddity offers the soul laden “Rich Black” and Tsunami the darkly mesmerizing “Très Magnifique.” Maryland wordsmith Nate Bone warns about staying true to yourself and not selling out on “Hurt Your Soul.” Chicago’s Jeremiah Jae is featured on “Gang On Holiday (Em I Go We),” North Carolina’s Lord Jah-Monte Ogbon on “Crushed Grapes,” and the duo Marlowe on “My Own.”

Allen had produced and written all the album’s beats in 2019 just before his death. The posthumous production was handled by Vincent Taurelle and Vincent Taeger, who commented that Allen’s “great artistic vision… filled the songs even after he had left us.”  All of the artists connected to this project were obviously deeply influenced by Tony Allen. As poet Ben Okri so eloquently stated: “This man could have lived another 150 years and kept creating new worlds…He wanted the album to be open to the energies of a new generation…but like a great mathematician or scientist who found a code for a new world, with just a few beats, he created this extraordinary canvas.”

There Is No End is a testament to Tony Allen’s vision to let his beats carry forth the messages of a younger generation and create unity by fusing two different sonic worlds – hip hop and  Afrobeat. Now it is left to future generations of artists to keep the music and vision alive.