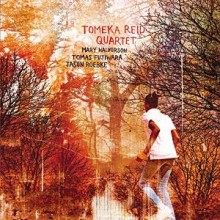 Chicago-based cellist Tomeka Reid has been a fixture in the city’s jazz scene for some 15 years now, but the quartet she leads only released its eponymous debut album in September of 2015.  Having seen this group perform at the 2014 Chicago jazz festival, I can attest to this record’s ability to capture her quartet’s spirit, weaving between pre-composed and improvised music.  While the Tomeka Reid Quartet’s music may perhaps be best situated within the avant garde of Chicago’s AACM tradition, this album has a sense of texture and melody that may heighten the group’s appeal to less-cerebral jazz fans as well as those who are interested in more experimental music.

Tomeka Reid Quartet leads with “17 West,” the only cut on the album that is neither an original composition nor totally improvised, an excellent reading of the Eric Dolphy tune that featured the great bassist Ron Carter on cello.  This cut allows Reid to situate herself firmly within the lineage of mainstream avant-garde jazz (which may not be such a contradiction in terms as it may suggest), despite her seemingly unusual instrument of choice.  To accompany her in this effort, Reid assembled an excellent team of musicians who are able to stretch out to the extent demanded by the group’s music, which lies somewhere between chamber music, jazz, and free improvisation.  She is joined by Brooklyn-based guitarist Mary Halvorson, New York drummer Tomas Fujiwara, and Chicago bassist Jason Roebke.

This quartet explores this album’s musical territories with energy and a sense of adventure.  “Billy Bang’s Bounce”—a tribute to the free jazz violinist—features a texture that gradually builds, taking on a hypnotic quality before opening up into a generous swing section for the group’s solos.  “Etoile” is a more conventional composition, loosely based upon the jazz musicians’ standard “Cry Me a River” lick, but expanding to feature remarkable solos by Reid, Roebke, and Halvorson, whose pitch-shifting guitar solos push the group further into less consonant territory while still remaining melodious.

The album takes more impressionistic turns as well, with Reid and Halverson freely improvising on “Improvisation #1” and the rest of the group joining this exercise on “Improvisation #2.”  While apparently composed, “The Lone Wait” is also abstract and atmospheric, pulling heavily from free-jazz influences.

All in all, Tomeka Reid Quartet is a fascinating statement from a group that is musically diverse and experimental.  The Tomeka Reid Quartet blurs the line between “conventional” and “avant garde” approaches to jazz and is to not be missed by serious jazz fans.