Music has been used throughout the centuries to mourn, celebrate, protest, and communicate. Music also brings communities together, and can raise awareness of those in need. Due to the recent flooding in Louisiana, which once again has left thousands homeless, we’re drawing attention to the state through three Robert Mugge documentaries that highlight and celebrate the diverse communities, unique musical traditions, and vibrant culture present in Louisiana. All were released on DVD or Blu-ray earlier this year. 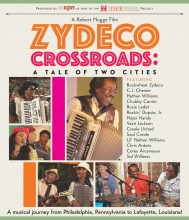 Zydeco Crossroads: A Tale of Two Cities is a new documentary about Philadelphia radio station WXPN’s sixteen-month project, supported by the Pew Center for Arts & Heritage, which explored, preserved, promoted and celebrated the Creole culture of Southwest Louisiana. The film features Zydeco music and musicians both past and present, connecting them to the blues and the social, political, and cultural history of Southwestern Louisiana. In 2016 it received the Best Blues & Roots Film Award at the Clarksdale Film Festival. 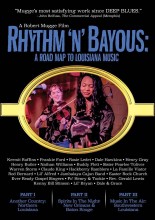 Rhythm ‘N’ Bayous: A Road Map to Louisiana Music (2000) is a three part film that the New York Times’ Stephen Holden called “part musical travelogue, part anthology, part archival document.” The film chronicles Mugge’s journey throughout Louisiana as he compiles a singing dictionary of the state’s roots music styles and assorted hybrids, from the blues and gospel to swamp pop to the fusion of Cajun, Creole and rock ‘n’ roll known as zydeco. 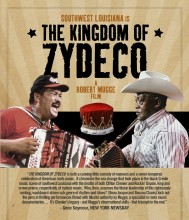 Title: The Kingdom of Zydeco

Mugge’s third film released this year, The Kingdom of Zydeco (1994), delves into the Black Creole music scene of Southwest Louisana and attempts name a new “King of Zydeco” in the 1990s. Throughout the film, Mugge discusses musicians such as Clifton Chenier, Boozoo Chavis, Rockin’ Dopsie, and Beau Jocque. Also featured are concerts, including a joint appearance by Boozoo Chavis and Beau Jocque, as well as stories from nightclub owners and zydeco deejays. This is a fantastic record of the many musicians and characters who made up the time period many call zydeco’s “Golden Era.”

Whether a beginner or a life-long scholar of music in Louisiana, these films are sure to help anyone gain new insights about the state’s unique music and cultural traditions.