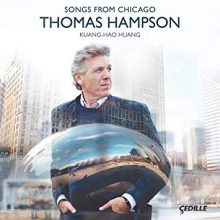 Songs from Chicago, performed by one of America’s leading baritones, Thomas Hampson, is a collection of art songs from composers associated with mid-twentieth century Chicago. Though five composers are featured in this project (including Ernst Bacon and Louis Campbell-Tipton), of particular interest to our readers are the works by African American composers Florence Price and Margaret Bonds, as well as John Alden Carpenter—all of whom draw upon the poems of Langston Hughes.

As he was researching songs for the album, Hampson was “surprised at the list of prominent, yet still relatively unknown American composers of song who emanated from or settled in Chicago.” One example is Florence Price, who moved to Chicago in the 1920s with her family from Little Rock, Arkansas. She went on to become the first female African American composer to have her piece performed by a major American orchestra when, in 1933, her Symphony in E Minor was played by Frederick Stock and the Chicago Symphony Orchestra. Price’s settings of Hughes’ poems “Song to the Dark Virgin” and “My Dream” (from Dream Variations) are beautifully sung by Hampson.

John Alden Carpenter, one of Chicago’s most prominent 20th century composers, is known for his early use of jazz themes and his Four Negro Songs from 1927 is an excellent example. The lyrics are excerpted from some of the earliest poems by Langston Hughes, which are also notable for their exploration of the sonic landscapes and aesthetics of jazz and blues. Hampson performs only three of the Four Negro Songs, possibly due to CD time constraints, which is a shame since it appears the work has seldom been recorded in its entirety. Included is “Shake Your Brown Feet, Honey” (from Hughes’ Song for a Banjo Dance, 1922), “The Cryin’ Blues” (from Blues Fantasy, 1926), and “Jazz-Boys” (from Harlem Night Club, 1926).

Margaret Bonds, a friend and mentee of Florence Price, is another celebrated African American composer, pianist and Chicago native. Bonds is best known for the songs she composed after moving to New York, where she became a prominent figure in the Harlem Renaissance. The works performed by Hampson include Bond’s eloquent setting of Langston Hughes’ signature poem, “The Negro Speaks of Rivers” (which was also set to music by Howard Swanson), as well as Three Dream Portraits (“Minstrel Man,” “Dream Variations” and “I,Too”).

Released by Chicago-based Cedille Records, Songs of Chicago was made possible in part by the Hampsong Foundation, a nonprofit organization started by Thomas Hampson in 2003 that, through classical song, promotes intercultural dialogue and understanding. Both Hampson and Cedille Records are to be commended for bringing these historic treasures to light. As Hampson states in the liner notes, “[the composers’] songs and their choices of poets consistently show a dedicated purpose to explore the psyche and circumstances of all Americans…we can learn so much from the various cultures that comprise the very kaleidoscopic culture called “American.” Amen to that!